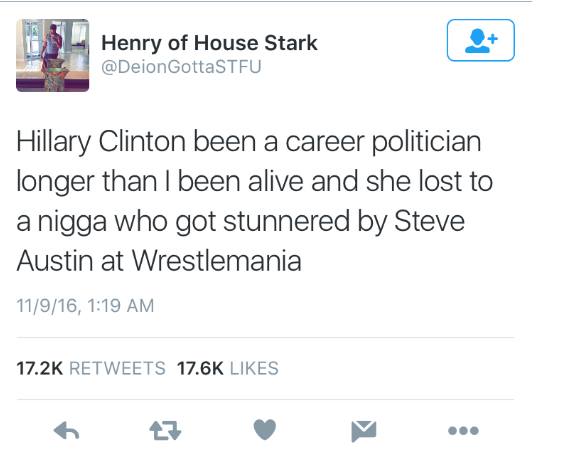 So. The polls were wrong. Clinton got the popular vote by a little, and lost the electoral college by a lot. To Trump’s supporters, Trump won. Yet a more accurate conclusion is that Hillary Clinton lost: lost the young voters, lost the confidence of her own party, shook off the notion – a kind of meme until now – that one could merely procure the presidency with entitlement alone. She lost precisely because this was an election that should have been un-losable, what with an experienced career politician running against a TV star who was caught, on video, describing what was perceived to be sexual assault, with a dozen or so women coming forward to corroborate this. To be sure, both are still extremely unpopular, scandal-prone figures. Neither managed to win the majority of the electorate, whipped up, at each side, by hatred for and fear of the other side. Their antics ensured the rise of Third Party candidates, and even put Bernie Sanders, a life-long Independent, socialist, atheist, and Jew, into the spotlight as the ‘spirit’ of America’s populist wing, with a reasonable chance of being President, today, had he been the nominee. One candidate promised mass disturbances if the other side won. Then, that other side lost, ushering in a wave of protests that questioned the new president’s legitimacy, replete with petitions to get the electoral college to do the Left’s bidding, an ironic little twist that’s lost on the protesters, and the entire Democratic Party, really, which is still trying to figure out what went wrong.

Yet the question of why Hillary Clinton lost is not a very complex one. One merely needs to look at her behavior over the last thirty years, and the superficially unique alternative Donald Trump offered. Whereas Clinton had been entrenched in a terrible establishment for decades, Trump presented himself as an ‘outsider’ ready to “drain the swamp” of political life. Of course, Trump has already filled the new administration with Washington insiders, with hardly a protest from his supporters, but that doesn’t matter. Nor does it matter that he’s now turning his back on other, key campaign promises as well. The “great, big, beautiful wall” that Mexico would pay for has become a “fence extension” with “a double layer,” that his poorest voters will now pay for, which was, ironically, Hillary’s own proposal. Obamacare, once a “total disaster” which needed to be “completely repealed,” will – if Trump has his way – be preserved at its core due to the popularity of its individual parts. Jamie Dimon, whom Trump has criticized for even being considered for Secretary of the Treasury by Clinton, has now been extended the same invitation by the Trump team. The mass deportation of illegal aliens, another Trump cornerstone, is not really a priority, now. The Iran deal, which he vowed to “rip up”, will pretty much remain the same. And when asked about the mass registration of American Muslims, as … Continue reading →

In 1954, a now-forgotten study was conducted that, looking back, reveals more about political thought than most voters care to admit. At a time when the debate surrounding human nature was not so imbued with meaning for ordinary folks, psychologist Muzafer Sherif wanted to see what human competition – and its evolutionary analogue, cooperation – might look like in its ‘purest’ state. Of course, this is impossible to truly test, for a variety of reasons, but it is possible to get clues, or at least be nudged a little closer towards them, if one merely puts one’s biases aside and looks at things anew.

Perhaps the hidden purpose of Sherif’s study was to look at group bonding over seemingly trivial things – emphasis on ‘seemingly’, as there’s an inner reason to words, rituals, and motifs which is frequently ignored. For the first portion of this test, he organized two groups of children in Robbers Cave State Park, Oklahoma, into a kind of summer camp, yet run in such a way that one group couldn’t guess the other group’s existence…at least not for a while. They were both supervised, but not excessively so, and thus left to find their own meaning. Despite being thought of as ordinary children, each group quickly developed an identity, a set of ‘arbitrary’ values, an agreed-upon hierarchy, and in-group cooperation as they staked out territory and passed the time hiking, swimming, and playing games. One group thought of itself as fighters who never cried. The other group adopted an almost puritanical refusal to use foul language. They both had rituals, songs, games, and territories they’d patrol, enjoy, or simply mull over. Yet as soon as the groups learned of each other’s existence, they quickly became even more tribal, growing upset when ‘their’ land was infringed upon, further emphasizing their own rituals, challenging the interlopers, and even starting fights with weapons that had to be taken away by the adults.

Now, it could be said that at least a part of all this was ritual war: an extension of men’s competitiveness into realms that only symbolized violence, thus serving as a safe outlet for ordinary urges. Or it could be said to be an example of something far more sinister, which, had the adults not been involved, would have led to the pointless attrition one sees in tribal groups today. At any rate, something in the kids ‘knew’ to behave in ways quite like the more well-known, violent specimens in the anthropological record. To be clear, these were not children who were competing over precious resources. They were not pressured by the environment to do this or that. They were not raised without culture, but came from families who at that point in human history had seen some of the lowest rates of violence ever known. Moreover, they were screened for good health and psychological standing, meaning, they could not easily be called sociopathic, or be manipulated by one or two sociopaths among them. More likely, … Continue reading →