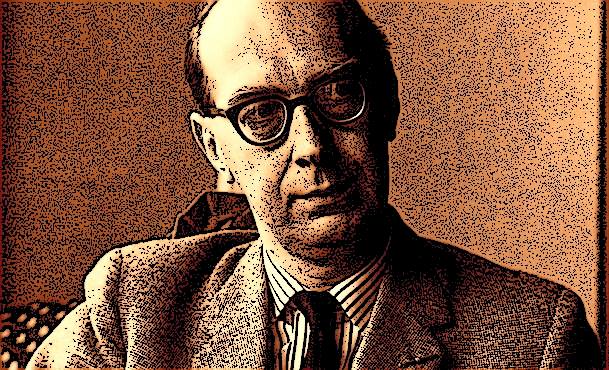 Although Philip Larkin is one of those writers best read in abridgment, one can’t deny that he has written some excellent poems at his best. More, Larkin is a great poet to read when young: that is, when poetry still feels like a second language, as he is not only easy to ‘get’ line by line, but is still technically competent even in his worst material. This means that Larkin can always be probed a bit more deeply…even if, coming out on the other end, one realizes it was all surface.

Although Larkin’s “Church Going” is one of my favorite poems, I can’t really argue that it’s a great one, or even Larkin’s best. That it fails in some spots, however, makes it especially ripe for analysis, and becomes – paradoxically – easier to argue for its immanent qualities given how quickly they bubble to the surface. By contrast, a poem like “High Windows” is cordoned off unless you know what to look for, and even then it is a bit harder to explain its successes. Not here, however, as “Church Going” maps its own trajectory in a way that’s less demanding of the reader:

Once I am sure there’s nothing going on
I step inside, letting the door thud shut.
Another church: matting, seats, and stone,
And little books; sprawlings of flowers, cut
For Sunday, brownish now; some brass and stuff
Up at the holy end; the small neat organ;
And a tense, musty, unignorable silence,
Brewed God knows how long. Hatless, I take off
My cycle-clips in awkward reverence,

A good introductory stanza, and one that gets better as the poem goes on. It sets the scene, rhythmically, with solemn pauses (the first sentence; the use of lists and colons which nicely lend themselves to rest-stops) and does not hammer you with its deeper purpose outright. So far, it could be a theological poem or something else altogether, thus giving an opportunity for both poet and reader to meander a bit before settling into its actual narrative. No, there are no great lines here, but there are little details that do worm into one’s memory: casually baptizing the iconic portion of a church as “the holy end”, for one, or the neglect of church flowers as a small metaphor for what comes. More, the language creates – especially by the end of stanza 2 – a definite impression to play off of, which not only paces Larkin’s argument but also makes it easier to swallow when it does finally show itself.

One website incorrectly writes in a period after the stanza’s last word. Yet notice the negative effect this would have:

…Hatless, I take off
My cycle-clips in awkward reverence.

There is a finality here which locks the poem into a trajectory it does not have. Further, one expects more scene-setting – perhaps an addition to the first stanza’s lists – before the task of commenting on the scene itself. This is an issue of pacing, and whereas it is important in everything from short stories to the abstractions of Wallace Stevens, it’s often easier to see it in a poem like this. In short, “Church Going” is long enough to have a plot-like narrative, where pacing is more visible, yet short enough that any disruptions to it can be felt right away.

Move forward, run my hand around the font.
From where I stand, the roof looks almost new –
Cleaned, or restored? Someone would know: I don’t.
Mounting the lectern, I peruse a few
Hectoring large-scale verses, and pronounce
‘Here endeth’ much more loudly than I’d meant.
The echoes snigger briefly. Back at the door
I sign the book, donate an Irish sixpence,
Reflect the place was not worth stopping for.

While the first stanza sets the scene, the second deepens it, and pushes for a specific narrative spine. Yet there are some obvious missteps which come too early in the poem. Lines 2 and 3 are utter throwaways (“Someone would know: I don’t.”) and act as a tangent to the stanza’s middle, which is really where the poem churns. The reading of the “large-scale verses”, for example, sounds a lot like the narrator’s personal curiosity, not some abiding religious faith, while the final line seals this interpretation. Note, however, that one already senses – from the respectful language, the narrator’s self-consciousness – this will not devolve to mere agitprop for or against some side.

Yet stop I did: in fact I often do,
And always end much at a loss like this,
Wondering what to look for; wondering, too,
When churches will fall completely out of use
What we shall turn them into, if we shall keep
A few cathedrals chronically on show,
Their parchment, plate and pyx in locked cases,
And let the rest rent-free to rain and sheep.
Shall we avoid them as unlucky places?

We can now guess why the narrator wishes to stop at a church where “nothing is going on”: the melancholy is deeper there, is more apropos of his argument. There is no ‘what-if’ scenario: Larkin describes a very specific ‘when’, yet manages to do so without bludgeoning the reader with his secularism. Instead, he wraps his certainty re: one thing (the eventual demise of religion) around his uncertainty in what he, personally, ought to do in these situations, creating empathy for himself even as he stakes out an unpopular position. More, a good chunk of the stanza is a collection of well-worded images (“cathedrals chronically on show”, “rent-free to rain and sheep”, “Their parchment, plate and pyx in locked cases”) rather than the argument itself, thus keeping one’s mind piqued by some simple sentences before Larkin builds to more disagreeable ones. This is called rhetoric, and it is just as important as the traditionally ‘poetic’ stuff such as unconventional language and musicality, inviting biased readers into the fold who might otherwise be turned off by the poem’s content.

Or, after dark, will dubious women come
To make their children touch a particular stone;
Pick simples for a cancer; or on some
Advised night see walking a dead one?
Power of some sort will go on
In games, in riddles, seemingly at random;
But superstition, like belief, must die,
And what remains when disbelief has gone?
Grass, weedy pavement, brambles, buttress, sky,

The narrator’s uncertainty intensifies, as spirituality is invoked even in the dearth of religion, while the stanza’s imagery (“Grass, weedy pavement, brambles, buttress, sky”) nicely parallels the sort of lists that the first two stanzas provided. This also reinforces Larkin’s transition from observation to comment.

A shape less recognisable each week,
A purpose more obscure. I wonder who
Will be the last, the very last, to seek
This place for what it was; one of the crew
That tap and jot and know what rood-lofts were?
Some ruin-bibber, randy for antique,
Or Christmas-addict, counting on a whiff
Of gown-and-bands and organ-pipes and myrrh?
Or will he be my representative,

More of the same: not bad, exactly, but a re-reading does wear a little thin. The rhetoric still works nicely, but the lists now have an insistence that is damaged by the prosaic writing. Further, given that we’ve had two ‘religious’ stanzas and three ‘secular’ ones prior to any deeper comment, there is an asymmetry the mind wishes to be released from. Yes, the stanza is still necessary for setting up the next transition, but it could have been condensed a bit given that the poem runs a mere 2 pages back-to-back. Still, one can argue that it’s saved – at least to a degree – by the stanza’s last line: a nice, unorthodox use of “representative” (after year another stately pause) that has everything before it lead up to this moment.

Bored, uninformed, knowing the ghostly silt
Dispersed, yet tending to this cross of ground
Through suburb scrub because it held unspilt
So long and equably what since is found
Only in separation – marriage, and birth,
And death, and thoughts of these – for which was built
This special shell? For, though I’ve no idea
What this accoutred frowsty barn is worth,
It pleases me to stand in silence here;

Now the intellectual thrust: or rather, the beginnings of it, robed in more complex, free-wheeling sentences. In a way, they contradict the uncertainties which came before, for while Larkin once used imagery as a cushion, now he will drive forward having already buttered up the more skeptical readers. They now have no choice but to, if not accept, then at least entertain the poem’s ending:

A serious house on serious earth it is,
In whose blent air all our compulsions meet,
Are recognized, and robed as destinies.
And that much never can be obsolete,
Since someone will forever be surprising
A hunger in himself to be more serious,
And gravitating with it to this ground,
Which, he once heard, was proper to grow wise in,
If only that so many dead lie round.

Larkin saves all the ‘best’ – that is, most individually memorable – lines for the final stanza. Notice the slight condescension in the first, the poeticisms – from “blent air” to the “meeting” of “compulsions” – of the second, and how the poem’s entirety is pretty much distilled in the third. Yet the narrator pulls back from derision by the fourth, in a sense putting himself into the same category as the believers that he’s been so skeptical of. The effect is similar to a (greater) Countee Cullen poem, “Heritage”, even as it’s less surprising and less technically virtuoso. The final line is a touch too abrupt, even as it nicely recapitulates the narrator’s skepticism: that this aura of wisdom comes from the arbitrary demarcation of death, whereas living is more complicated than either ‘side’ is willing to admit.

I’d easily recommend Philip Larkin to anyone, but also suggest reading him more critically than he’s been allowed. Lots has been made of his inner melancholy and how similar the poems are to the man, himself, but little attention has been paid to the poems themselves. It’s a shame, really, because the poems are what made Larkin, even though they are both more – and less – than what the critics have suggested.