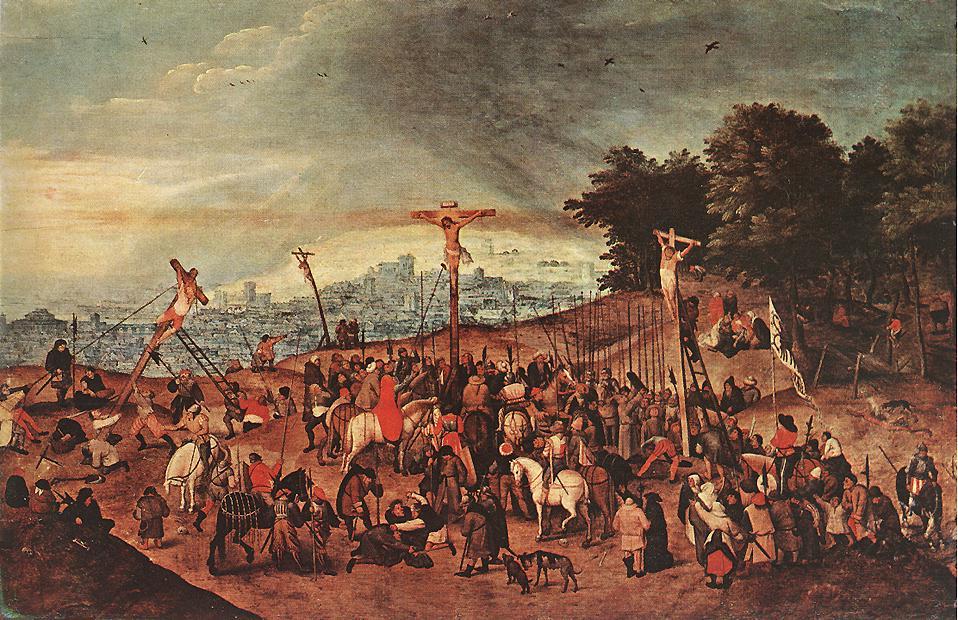 In some ways, Brueghel the Younger was a lesser imitator of his father (Bruegel, sans the ‘h’) who was responsible for classic paintings like “The Fall Of Icarus” — an early landscape that subverted what the term meant — and “Two Monkeys.” He’d take his father’s trademarks of symbolism, disfigurement, and religious cynicism and pat them down into a formula, until everything that was good and fresh about the paintings had been cooked down, bottled, and shelved away into something more serviceable than technically innovative, or ideationally deep. Yet, as “Crucifixion” shows, even a formula repeated often enough can lead to something of value, if only by accident.

Yes, the conceit is clearly his father’s. There is Jesus, on the cross, almost made anonymous by three other figures crucified around him, and a huge crowd below that wishes to swallow up the action of the painting. It doesn’t, for Christ is in the center of the painting, and, more importantly, seems to be the center of the action, too, despite the fact that he takes up so little space. Yet there are some original additions, as well. The buildings are grayed-out, as if they’d been destroyed — or would be destroyed in the future — in some cataclysm, and are now covered by wind and clouds. An odd streak of reddish-brown runs across the sky, following the horizontal portion of the cross, as if something ‘resists’ Christ’s death, while the other men are still in the midst of being hoisted up with ladders and ropes.

Christ, then, is the only dignitary here, an effect achieved practically by not magnifying him, not giving him much movement or verve, while kindling all the rest. At the same time, one can’t help wonder whether the effect is demeaning or honorary, for one does not see the suffering, nor the holiness – only a dead man, or soon to be dead, barely dressed with only the smallest hint of divinity, occluded by the other crucified men.

It’s an interesting painting because much of the technique is so rudimentary, yet it nonetheless works. The figures are reminiscent of medieval “art,” which was often little more than an excuse for chronology or religious comment, and don’t have the startling detail of a Caravaggio or even a Bosch. Yet it still does much with very little: the placement of the figures, the streak of red, the mere discoloration of landscape. In many ways, art is not about being “pretty” or ham-fisted, but is about the organization of things like color, figure, perspective, ugliness, prettiness, and the like, to a higher purpose. “Crucifixion” accomplishes this, at turns commenting on its own subject, even as the painting seems to turn away from the conventional representations of such. This is in fact a good thing, for one does not merely ‘get’ Brueghel’s viewpoint — whatever it may be — but re-creates and otherwise rote and typical scene anew, with just a few alterations.

A few days ago on the subway, one of those itinerant preachers handed me a little pamphlet with an image of Christ’s body, whipped, scarred, and bleeding from the very violence this painting depicts. Odd, I thought, how crass, how insistent such people are, when the deepest human emotions are stirred by subtler things. Odder, still, that religion has never capitalized on this reality. Perhaps that’s not the point. Perhaps religion wasn’t meant to stir, and only to beckon. Yet what of artists, then, like Brueghel, who don’t take to such commands?

[An earlier version of this article appeared on BlogCritics on 9/2/2013.]