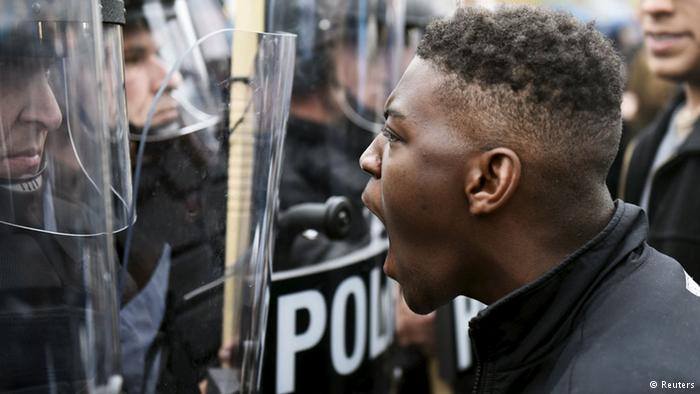 A week ago, the first ‘true’ Freddie Gray verdict came back as expected: Not Guilty. The result? Three officers are now free. Three are still left, perhaps a touch emboldened. On some level, of course, it does not matter, since the acquittal of one – as history shows – is the acquittal of all. Yet the reverse is not true, for the guilt of someone in power is never (so it’s said) to be extrapolated to power itself: what it does, what it cannot do, and where the rest of the world must go when the thing’s exercised. There are, as far as I can tell, two reasonable narratives here, but in Freddie Gray’s case – as in all similar narratives – only one has really been discussed. It is truthful, yes, and quite damning of the forces involved, but also somehow less adamant. It is less whole. It is, in a word, less dangerous. And it goes thus:

A black Baltimorean with a string of drug offenses sees 2 cops riding their bikes, makes eye contact, and flees. Perhaps he was expecting this. Perhaps he has something illicit on him. Or maybe he’d already done it so much and without penalty that it is merely the ‘thing’ to do. At any rate, he is chased, arrested, and according to the police report, is “taken into custody without incident.” It is impossible to say why he ran, exactly, since only a pocketknife is found on him: a source of controversy given that Maryland law states Freddie Gray’s spring-assisted knife was legal, whereas Baltimore law says that it was not. Once inside the van, the trip to the police station involves 4 stops, including one which brings another suspect on board, while Gray – against official policy – is never buckled in. An hour later, he is in a coma with a severed spine and fractured vertebrae, and dies the following week.

Naturally, there are problems with the official narrative. First, it is odd for a seasoned drug dealer to run without provocation, especially at a time when he was simply visiting a friend rather than making a ‘business trip’. More likely there was some sort of altercation, or an unofficial policy of harassment targeting Gray and others. Yes, it’s possible he simply feared being searched, due to the knife, but that would only be to a non-consensual search which, given the circumstances, would have been illegal in the first place, a fact the cops would likely ignore, anyway, leading to a chain of events with a similar outcome. And while flight might have been a bad move on Gray’s part, the courts have always been ambiguous on whether the act of mere running from an officer is reasonable suspicion, while Baltimore’s police commissioner claims there is no explicit law against such to begin with. Moreover, the assertion that Gray was “taken into custody without incident” is a lie, and an important one, since video footage shows Gray as well as bystanders shouting over what is perceived to be police brutality, with Gray physically dragged to the van in leg irons. And if “reasonable suspicion” is applied to Gray’s behavior, then reasonable suspicion can be applied to the cops’, as well, whose earliest actions are critical for exculpation. For if Gray were to be taken in “without incident,” then great; the rest is all accident. If not, the latter vengefulness is an outgrowth of what, at first, might have been a mere game to the department. Oops!

Yet for all that, I’ve only given you the simian line: that is, the way the brain tends to manufacture narratives that, right or wrong, miss what’s truly relevant. There are at least a couple of other layers here, and the first one’s almost too easy for unearthing. In short, re-read the previous paragraph – the one that’s full of speculations, what-if scenarios, corollary – and ask yourself this question: who gives a shit? I mean, really: it is all background noise, for every detail, from Gray’s criminal history, to his perfectly legal behavior that morning, to the possibly brutal circumstances of his arrest, are IRRELEVANT to the real issue: what happened in the van itself, and who was or was not responsible for that and only that! No doubt that Freddie Gray was killed either by negligence, or by fiat. One is manslaughter. The other’s murder. Yet so much time has been wasted on impossible claims re: ‘rough rides,’ or what Gray was really doing that morning, or the cops’ good/bad histories, as well as Gray’s own past (or, hell, his present, for that matter!), that the only fruitful thing, a comparatively tiny, 30-minute sliver, is lost.

After all, police apologists have even gone on to lament Gray’s negative impact on his community, all the while forgetting – and this is important – that drug-dealing is not a capital offense, in the same way that Michael Brown’s death was frequently justified by a previous theft and assault. The onus, then, continually shifts from Person to Person, to Time, to Things, to Circumstances, then back, and the brain, so used to ancestral stimuli from a dozen directions that rarely needed some grand synthesis, doesn’t like to say No, and accepts everything, positively everything, but the One Thing, the Only Thing, which is simply left to fester. The fraud, then, is self-perpetuated, since the primary outrage is not ‘merely’ a wrongful death. Hell: it is not even the fact of racism, that non-whites are, proportionally, the overwhelming recipients of police violence. It is more so that there’s a double standard as it relates to power, that this power is invisible, that it’s incorruptible, that it is one of the last human constants to be apart from demotic control. And as bad as a single, or a hundred, or a thousand pointless deaths are, it is this second, far more dangerous narrative to which we turn.

To be sure, state violence is broken along racial lines: to deny this is to deny a basic fact of power, wherein power will break that which can be broken with as little danger to itself as possible. It is, in short, like an organism that needs to fill some dangerous niche, and is thus able to sniff out what’s puffery, and what true danger really looks like. And, yes, while there is a racial dimension to American violence, what of – say – the Athenian army in Melos? Or some tribal patrol in New Guinea that, by sheer luck, comes across a band of women from a neighboring village? More: what of chimps that are given ‘privileges’ over other chimps, jobs that, for whatever reason, presuppose trust by all involved, and therefore some reluctance to see violations as they occur? These, too, are a biological constant, and one that has only been lightly questioned in the preceding centuries. Yet there is another constant that is just as strong among social creatures. It is, on the surface, a mere numbers game. It crunches who does what, to whom it is done, and what one gets in return for the doing, pre-fitting the result into a formula to which there are only two possible responses: Yes or No. People have a deep sense of fairness, but it matters not whether individuals, themselves, act upon it. There is still a whim, a tendency, to corral them into a mob: that much-maligned ‘thing’ which, for all of its flaws, has some advantages in wider historical trends.

Ironically, then, it is because police violence is so efficient and opportunistically racist that will help end police violence FAR more quickly than simply taking it as some conceptual issue to decode. And just as with other natural phenomena, it might be argued that power has a kind of safety mechanism which keeps it from getting out of hand, for while cops continue to target blacks because it’s just so easy, as a means of preserving the status quo, the very act itself will chisel away at the thing in aggregate, even as it protects this or that individual for a time. In a way, then, Nature protects itself with flux, and when race activists seek one sort of change, they are unwittingly playing a game that’s been going on for millions of years now, thus engendering a far deeper outcome than they care to realize. In other words, race is the means, for bias is simply the ‘crumb’ that mobs understand best when the world’s depths are out of depth. Next stop? Violence, as a whole, for what bias could the world affix then? Or will it learn to play the game with concepts, as ideational acts supplant those that – as some have always known – are only nominally more real?