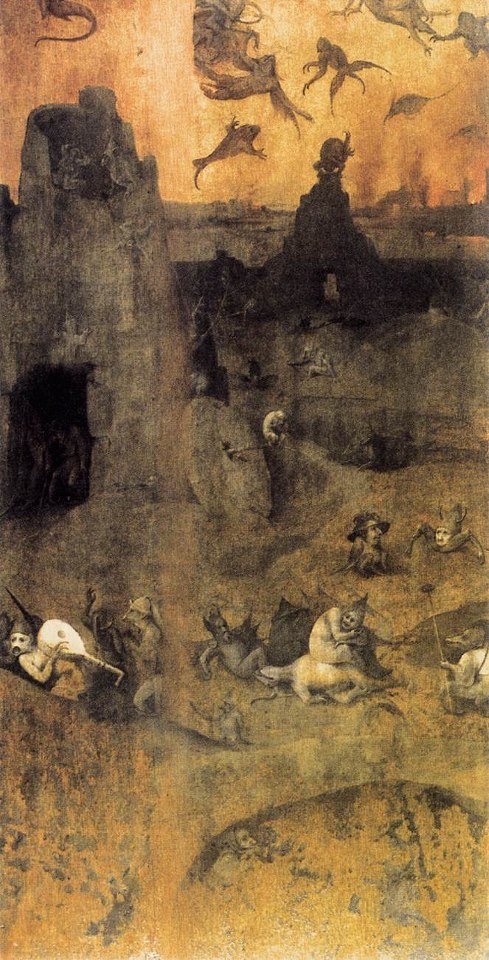 I’ve been a fan of Hieronymus Bosch for some time now, but have never really given him my public due. That will change as I plan to discuss at least a few of his paintings at some point, but suffice to say that I consider him one of the first truly great painters — greater, in some respects, than even some of the best-known painters of the High Renaissance, with whom he was contemporaneous. That is because while Leonardo da Vinci, Michelangelo, and Raphael were still at times stuck in the ancient Christian world of Old Rome, replete with its rote symbolism, simple — even twee! — tales, and predictable figuration, Bosch had turned to an unlikely, even contrarian, source: that of medieval art, with its clunky figures, simple landscapes, and other elements that, in lesser hands, stifled Western art of any real potential for many centuries.

This is because, under most circumstances, medieval art was simply flat. There was, on the one hand, no real technical merit, and on the other, no real idea, either. Bosch, however, was able to reach a compromise of his own making. Technical excellence, he likely realized, meant nothing without some intellectual heft, some deeper ‘trap’ or allure that would make mere technique absolutely REAL to the observer. So, forget the new standards of painting for a second, forget some of the better rules of perspective, and forget some of the repetitions, as well as the aesthetic demand for ‘beauty’. The more relevant thing, he instinctively thought, was not ‘beauty’ — which is always a tool or a preference, as opposed to an inherent good or depth — but COMMUNICATION. And not just communication, mind, but deeper communication, which might, in the right circumstances, involve less technically accomplished figuration, or colors and ideas that were presently out of vogue. Yet, in exchange, one would get a deeper look at the sorts of things the more popular painters were trying to do, via techniques that, while less showy, complemented the subject matter in a way that was not only richer, but more relevant to art in the long-term sense. Say what you will of the technical excellence required for the best Leonardo, or the greatest Michelangelo, but these are painters that have dated in a way that Bosch has not.

In fact, if one were to draw a line from the Italian Renaissance to modernity, the Renaissance painters would clearly be a kind of blueprint for the greater things to come. After all, who is Francis Bacon, Picasso, or Van Gogh more indebted to: the ideas (if not the artist) of Bosch, who revealed a more fractal sense of what art could be, or of the polish and re-polish of the Masters? Hell, even Caravaggio, who seems to be a direct descendant of Michelangelo, is only superficially of ‘that’ world. His ideas are just so completely different, and — even more importantly — are therefore treated differently by Caravaggio. Or Rembrandt, whose realism belied the fact that he wasn’t merely reproducing people as he saw them, but also commenting upon them in more roundabout ways. Bosch helped inaugurate, then, a new way of thinking, even if it would take a while for such things to diffuse. But when they did, there’d be no turning back, as many so-called great paintings were, in turn, relegated to the status of mere illustrations, capped, as they were, by their relative lack of ambition, and too great a focus on appearances (the realm of aesthetics), as opposed to what froths underneath said appearance (the real of art).

I like to use Hieronymus Bosch’s “The Fall Of The Rebel Angels” as an instructional tool because unlike Bosch’s more densely allusive work, with symbols that can only be recognized via some familiarity with Biblical and classical mythology — as well as the events of Bosch’s day — this is a painting of a scene that most intelligent people know, with the more discerning among recognizing the import of the figures’ grotesqueness, and thus being able to compare them to lesser and far more subdued representations of the same topic. Look, for instance, at how the sky — “heaven” — is not exactly harrowing, as a more predictable inversion might have things, but not welcoming, either. The shades of orange can imply fire, sunlight, or a sky in some sort of transition, but the effect is not absolute. The angels, up top, are circling about something, and going through a transformation. No, they’re not ‘beautifully’ painted, as per the High Renaissance artists, but they very much capture what’s REALLY being communicated. In the hands of the Masters, they’d merely be sanitized, and over-explained. That mountain? It’s have a definite analogue, somewhere in the Bible; the sky would be a more definite hue, and represent something exact; the angels would have faces that show hurt, regret, or something else equally spot-on and predictable, as opposed to the far more human — and terrifying — confusion that settles into the painting 1/3 of the way down.

Look, for instance, at the lone angel (or demon, now) sitting on a tree-branch or root, coming out of a weird and perfectly round formation, as if — unlike his associates, all around him — he’s been through this, now, and is ready to think things through. The root/branch that he sits on reminds the viewer of some niche or corner they, themselves, might attach to, whether it’s a favorite place at work, or a memory from childhood, and while this seems to be “his” spot, it doesn’t seem to be very comfortable. In this way, the viewer is discomfited, as well, due to the disconnect between associations and reality. To the left, figures are hiding, and their occlusion is both technically and ideationally unique. Technically, because, in a more traditional setting, evil is given a face, or at least a presence that is meant to scare. Ideationally, because if demons are in hiding, there must be something even worse that this scene implies, but never really shows. And that, by itself, is probably even more terrifying, since it touches upon human fear as it ACTUALLY is: an inability to cope with the unknown, as these demons clearly cannot. In this way, technique and intellectual heft are mutually reinforcing, which is really where art moves.

The actual forms of the demons, near the bottom, are also quite arresting. One has a face whose mouth has been replaced by a far larger ‘O’, giving the odd quality of both a scream (the trite thing to do in such a painting) as well as an object stifling that same scream, thus making the whole arrangement that much more disturbing. One demon is seemingly being eaten by another, while another looks on, either laughing, or expressing some other emotion altogether. And still others figures have been so manipulated, at this point, by their own transgression, that they are merely heads attached to legs, arms, and tiny bodies. Below, there’s the look of fire, and yet, instead of being tortured by such — again, as would happen in more cliched paintings — it is completely ignored, since the tortures, above, touch much deeper fears, of more abstract, less definable things. This is why there is an emotional impact, here, that the far more stale representations of God, angels, demons, etc. etc. etc. rarely capture. As I said in my analysis of a great Wallace Stevens poem, there are two ways to enter the heart: by tugging at it, and only it, and hoping for the best, or the more predictable (yet much harder to follow) route of the brain, which requires some stimulation before a connoisseur’s more base parts open up to be played with. This painting — and Hieronymus Bosch, in general — takes the latter approach, succeeding on on terms that the High Renaissance had not even defined yet.

6 Comments → Hieronymus Bosch’s “The Fall Of The Rebel Angels”