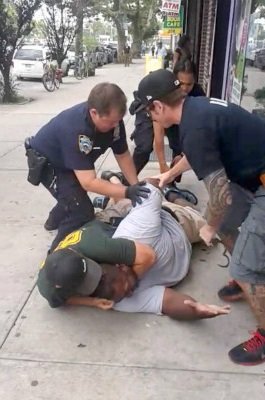 Eric Garner gets sent back to Africa. Image via Huffington Post.

Now that the Grand Jury pose is over — for it was little more than a police procedural, anyway — and returned not 1, but 2 mathematically unheard of judgments back to back, and after all the justifications, the stupidity, the red herrings, it’s time to inject a little sense into what has transpired.

There is, in fact, very little to figure out. There’s remarkably little information to slog through, and even less evidence ‘pro’ and ‘con,’ for most of the evidence is, as it was then, on the side of the dead. I’ve already dealt with Ferguson’s Michael Brown and Staten Island’s Eric Garner at length, so I won’t go into detail, but merely recap and sum up the new developments. Indeed, time is but compression, and so, months after the original incidents, it is now much easier to get to the bottom of things.

So, here are the facts as they’ve come down to…well, to everyone, really:

Michael Brown was stopped by Darren Wilson, with dozens of witnesses claiming an altercation between the two that — according to virtually ALL of these witnesses — does not really support Wilson’s account, with many outright contradicting Wilson’ claim of merely ‘fighting back’ against a far larger aggressor. Dozens of witnesses claim that Brown was pursued, with many insisting that some shots were fired during pursuit: a flat-out criminal act. Many witnesses claim that Brown turned around in reaction to a shooting, consistent with original witness testimony re: ‘appearing’ like he was shot, and, predictably, reacting to this perception.

Now, some claim that Brown ‘staggered’ toward Wilson, due to the shooting. Some said he ‘walked’ prior to acquiring any major wounds. Many said he had his hands up the whole time. Still others were unsure. Yet only a handful, out of dozens, EVER claimed that Michael Brown was charging Wilson, with most of those adding the oft-ignored corollary that the ‘charge’ or aggression occurred AFTER the first bullets were fired.

In other words, self-defense, on Michael Brown’s part — that wonderful phenomenon wherein a man who wants to kill you doesn’t get to, and is kept from engaging in such misconduct in the future, and forever.

And here’s the thing about self-defense that people don’t quite seem to get, even as they’d readily apply it to cops and to white victims. If you are being pursued by a man with a gun who — according to most witnesses — opens fire at you without real provocation, it is well within your right to not only CHARGE the would-be killer, but nip his balls, tweak his nipples, and circumnavigate his eye-balls with a phonograph needle dulled on too many bad Fleetwood Mac songs. This is called basic human etiquette, yet Michael Brown is not exactly given the benefit of such doubt. In fact, it’s quite telling that he needs the benefit of anything, really, when so many eye-witnesses have already said the things that a dead man cannot.

And yet more facts, more peculiarities. Recall the little-known revelation that Wilson admitted to washing off blood? Now, whose blood was it, and why would a cop familiar with the judicial process decide to get rid of already-scant physical evidence that could corroborate his (as of 12/3/2014) nearly one-man testimony? Moreover, how was he even allowed to do so in the first place? How does a police department used to such a process NOT quarantine the man as de facto evidence, itself, unless of course they were uninterested in said process, and didn’t really wish to pursue it in the first place?

Then, there’s the issue of the near-empty incident report after Brown’s killing, the contradictory testimony of Wilson and the Ferguson police department, which changed its story multiple times, and the chief claim that, despite the fact that Wilson had a gun drawn on Brown, the kid charged the gun (not the ‘officer,’ as is claimed, for when you’re 18 and see a barrel pointing at you, all else tends to fall away in importance) like a suicidal bull, a suicide that Wilson charitably gave the kid, and, in turn, received ‘charity’ to the tune of $500,000, thus allowing him to quit his job.

Yet the utter weirdness of it all doesn’t even come close to the misconduct of the Grand Jury, wherein the prosecutor, Robert McCulloch, did little but ATTACK his purported client, boost Wilson’s defense, and more or less admit that he was NOT interested in doing the job that the protesters’ own taxes paid him to do. Legal experts across the country have criticized this stupidity at length, so I won’t re-hash their arguments here. But suffice to say that while a non-indictment may be a statistical aberration, a Grand Jury proceeding wherein ALL the stops are pulled to clear guilt as opposed to find evidence of such (which is, in fact, the purpose of a Grand Jury) points to a cover-up. And it’s a cover-up that’s implicit in the words of those legal experts, even as most refuse to say this out of a cowardly wish to cover their own asses. Naturally, this is why lawyers are so often called parasites: even if they’re not parasitic at the start of their careers, they are eventually wrung through an environment wherein THAT is the only real symbiosis. 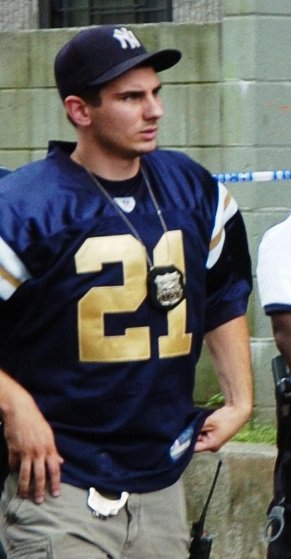 And I guess here is where all of the constructive feedback starts to roll in. Cop accountability, it is said, is quite important, so let’s make ’em all wear cameras. It’s a step in the right direction, to be sure. Yet there’s a problem with this idea, too, for Eric Garner’s confrontation with the police had been caught on tape. Indeed, it was also witnessed by dozens, from the time Garner was alive, to the illegal take-down, to his pleas about not being able to breathe, and to his final expiration.

Not only that, but despite all the media bullshit about Eric Garner dying from being ‘too fat,’ the medical examiner ultimately ruled it was a case of homicide, due, explicitly, to the choke-hold. That is, they ruled that a banned maneuver — banned, by the way, precisely to avoid such gray areas — was responsible for a man’s death, a man who was 100% non-violent, yet was tackled by 4 incompetent cops who could think of no other way of bringing a non-violent resister down, only to be choked and killed by 1: Daniel Pantaleo, who already had a history of police misconduct, forcing the city to pay $30,000 in a civil case due to his ill and violent behavior, with another civil suit in an unrelated case pending.

Again, for those who require reiteration: despite the fact there’s video evidence of a man being killed by police, who use a banned maneuver to squeeze all life from the neck up, and a medical examiner’s conclusion of “death by homicide” as per the banned maneuver, from a cop who had a pattern of improper behavior including a public strip-search and slapping a man’s genitals, there’s STILL no indictment?

Even if one were to assume the best, and claim that Daniel Pantaleo simply misjudged things, there’s STILL the fact of sheer negligence. In short, if you are given a monopoly on lethal force, and, therefore, a strict set of protocols to ensure this force is not abused, yet decide to completely ignore said protocols, and even insist on using a banned maneuver despite a plenum of other options, this is called stupidity compounded by negligence, which, in the case of a death that comes as a direct result of such negligence, is really criminal negligence.

In most cases, the offending party is quickly punished, as per a simple and universally understood system of cause-and-effect. In Eric Garner’s case, however? You have little more than a de facto admission of guilt — and, of course, insisting on better police training, ‘rebuilding trust,’ body cameras, etc., is very much an admission that something went quite wrong. It’s just that, in this case, no one will be held accountable. It’s just too controversial — the evidence, I mean — and who knows what happened, anyway? One can’t hear the crunch of the trachea on video…right? ‘Your people need to be patient.’ Remember that old dictum? So, this doesn’t ever really happen — at all. And what doesn’t happen has no perpetrator. Nor, if the logical thread is followed, a victim, because death, after all, is not a victimizer, merely something that comes, goes.

Eric Garner, in full: non-violent man is taken down by 4 incompetents, as Daniel Pantaleo chokes him to death:

Yet the responses have been promising. Protests will happen, there’s gonna be a federal investigation of Eric Garner’s death (just as there was supposed to be of Michael Brown’s), and, well, 12/3/2014 is important for another reason. Tonight is the annual tree-lighting ceremony at Rockefeller Center, a fact that Gretchen Carlson of FOX News has alerted us to. “I hope nothing’s gonna happen in New York City here today,” she said, nervously alluding to the Ferguson protests. “And we’ve got the tree-lighting ceremony!” Gee, a corrupt judicial system that lets videotaped killers go without a true legal process, and people’s natural reactions to such, and dear ol’ Gretchen is busy worrying a few balls hanging off some fir?

As for all that looting in Ferguson, and the looting that might happen across NYC? It is (duh!) 100% wrong. But while it is 100% wrong, it is also 100% predictable, the latter being the deeper and more relevant point. It is, after all, a mere pattern that kills black men in America, and it’s a pattern that keeps any real consequences from being dealt. Sure, put these guys on video: every last one of ’em! But remember, there is ALWAYS something bigger than reality, and this is the unwillingness to accept it.