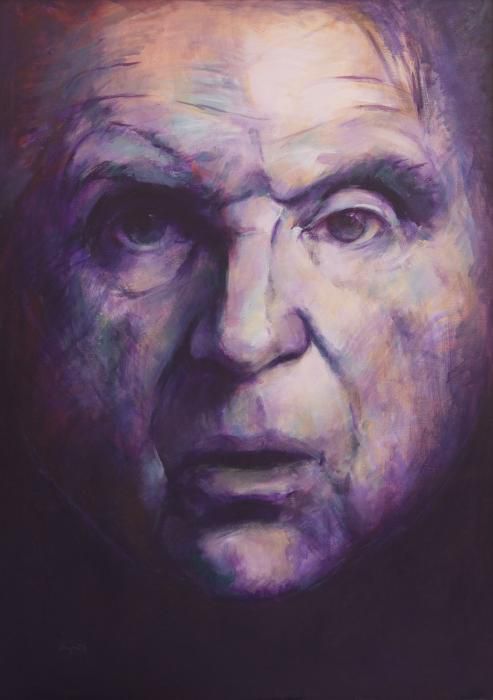 In many ways, the art of Francis Bacon was merely the technical side of a far deeper movement, probably in development ever since the first human beings decide to ‘create’ something — anything, really — and wondered of their own compulsion. This is the idea (from the 1800s onward) that art is not there to simply ‘look good,’ or to edify didactically, or to praise God, reject God, be social, be political, or any other singular thing that would get so often demanded of it. Instead, the idea was that art is here to communicate, which is really the most expansive definition of all, incorporating many of the old, bias-ridden requirements all the while forging wholly new ones. Van Gogh was already doing this in his landscapes, given, as they were, to colors and techniques that were less beautiful than evocative; Walt Whitman was busy opening up poetry in the same direction, being full of seemingly ‘rough’ declaratives that must have sounded quite alarming to classically-trained ears; and Pablo Picasso hyper-developed the idea well into the 20th century, to the point that it became abused by AbEx painters who’d confuse ‘communication’ with literally an infinity (as opposed to a multiplicity) of meanings. Yet if Picasso’s a little too tough for beginners to always get, the art of Francis Bacon is still here, sans much of the depth that can otherwise occlude Piccaso’s meanings. This is not so much a knock on either, as it is an admission of the fact that, great or not, not every truly great painter is instructive; and, of course, not ever instructive artist will be great.

One of Bacon’s most famous paintings is Study After Velazquez’s Portrait Of Pope Innocent X (1953), part of the so-called ‘Screaming Popes’ series (of which there are close to 50 paintings). It takes Diego Velazquez’s portrait of the arch-conservative Pope — in fact, one of the most famous portraits in history, replete with light refracting off of his chest, the determined look, the curious stifling the almost small-‘A’ abstract backdrop — and gives it an entirely new context. In it, the figure is being closed in (by the outer portion of a skeletal chair?) with Innocent’s once-refracting chest moved about a foot down, all the way to the waist, so that mere coloration has the effect of making this personage seem disembodied. On top, Innocent’s calm — simmering, in Velazquez — is changed into a scream, with the rain-like colors either intensifying or recapitulating its effect. 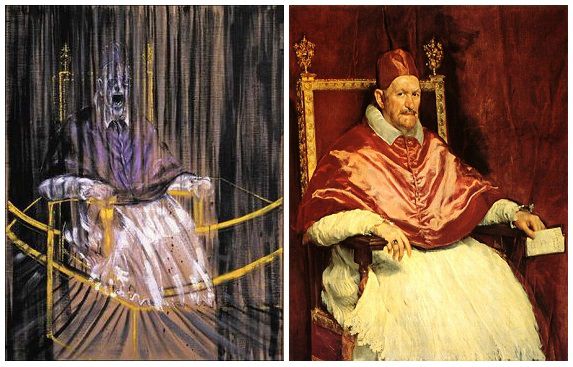 No, it’s not a great painting, for like most of Francis Bacon’s art, it points to little but its own self. Yet one must take note of what it does well. There is, for instance, the way it plays with its own influences, for Bacon did not arbitrarily choose Diego Velazquez as his model: he saw (or thought he saw) what might have been underneath Innocent X’s glance, and deduced from this a number of routes that it might go. To see Bacon’s stylization is not a huge leap of logic when coming from Velazquez; it is merely a different path, a sort of decision-making that, unfortunately, rarely underpins so much ‘experimental’ art, whether in film, writing, or some other medium. Nor is the technical side easily dismissed, for the colors (sometimes thought of as “curtains”) thin out, thicken, alternate, and really do give the illusion of something being hidden — except, of course, for the mouth, which seems to break out of the abstract shell the artist imposes upon him. Interestingly, Francis Bacon hides the eyes, as well, reminding me of what Rembrandt often said of his supposedly ‘unfinished’ paintings: the real thrust is already there, and in this case, the eyes are not it, but a diversion. No, it’s not ‘brilliant’ (that implies some deeper referent that the painting does not have), ‘harrowing’ (that implies a thing that’s a little more recognizably human), nor emblematic of any one movement, as it’s been argued. Yet very few paintings of this genre — not to mention niche — are as effective, and actually have the intellectual heft underpinning them.

In other ways, Figure With Meat (1965) is based upon the same Velazquez painting, and has the same advantages and ills: 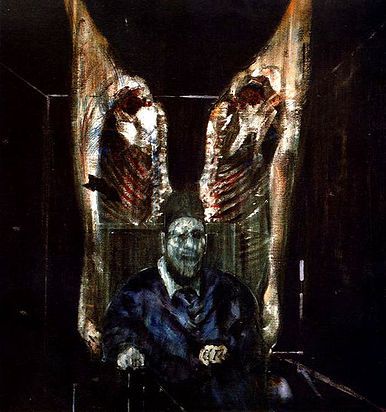 In the center, one sees yet another seated figure, this one more abstractly boxed in, with a slightly more subdued expression, in between, well, meat. There’s a lot that can be said about this work, mostly because, in a deeper sense, it says little itself, even as the superficial horrors it props up are stylistically well-done. Just think of what’s before you: there’s no real title to refer to (except a rote and recapitulative one), there’s no allusion to works past, and while the meat is not meant to be a symbol, it still does nothing to made the mind focus on some singular thing, on the one hand, or wander off to new and curious directions, as encouraged by the painting. One can only gaze at this sort of image, not play or engage with it on any deeper level.

Three Studies For Figures At The Base Of A Crucifixion (1944) fares better, and is instructional re: how this sort of art might work, on both technical and narrative levels. The first figure (as per most of the Crucifixion series) is somewhere between a creature and man, and seated on a chair or some other thing. Interestingly, the figure’s head can be interpreted in two ways: that of a head twisting back, as if in torture or to look at something, or no head at all but a suggestion of two arms being tied/held together behind the figure’s back. The eye is able to take in both possibilities, and it forces the brain to work, as opposed to merely take things in passively. The cloth, too, at the end of the chair is immediately seen as legs/feet by the eyes, depending on how the figure is being interpreted, revealing the sorts of tricks that Francis Bacon was capable of: mirages that, with a greater artist, would remain hidden and difficult to decipher, since they’d be so deeply married to a painting’s content that they’d be hard to isolate and study on their own. By contrast, they are quite ripe for analysis here, as in the second of the two figures (a neck wrapped in a towel, made unfamiliar by its mouth and the surrounds), and the last, which re-arranges ordinary human features in a way that is both seemingly illogical and immediately recognizable. The fact is, our brains are capable of entertaining multiple possibilities at once, and artists that know and exploit this vulnerability can learn to maximize their effects.

Thus, the art of Francis Bacon should be sought out by younger artists for reasons beyond its technical excellence. If one is, say, looking at a great Picasso, it’s all to easy to try and emulate that while missing the ‘thing’ that made Picasso great. In Bacon’s work, however, you can emulate the excellence — even you’re a bit inexperienced, yourself — and you’d probably never miss that deeper element. And this is not a bad thing, really, for artists need to learn before a (very) select few of them can evolve.

[*Note: all images are courtesy of Wikipedia unless otherwise noted.]