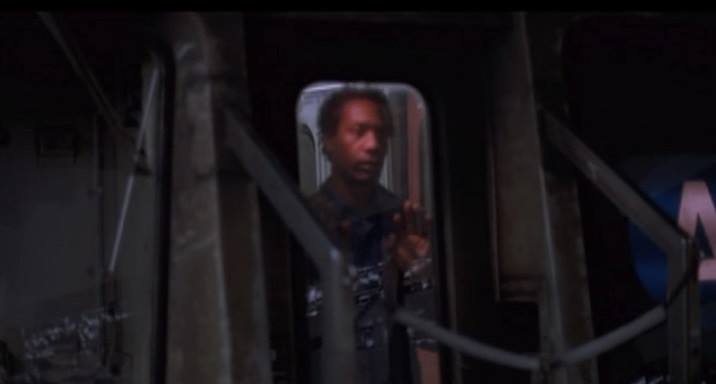 Near the end of John Sayles’s The Brother From Another Planet (1984), the film’s unnamed protagonist (Joe Morton) looks out of a train’s back-window as it pulls away, thus leaving him to reflect on things the viewer can never really know. Now, this may be an issue to some, but to those that get the fundaments of art, Morton’s ‘what’ is immaterial, perhaps even a distraction. This is because the film spends so much time showing Morton in bewildering situations, as well as his silent (albeit quite legible) reactions to them, that this particular scene is merely an extension of the same: poetic shots, familiar images cast anew, and elided (not ‘omitted’) details that help the viewer imbue their own perspectives into the film’s narrative. It helps, too, that Morton doesn’t budge, but merely stays there, in a shot that doesn’t linger too long, content as it is to simply capture the man’s recession and all that it makes him think.

And don’t let the film’s premise fool you: Morton is, at film’s end, a ‘man’ in the deeper sense of the word, for he does precisely what men must do. He re-considers his life, he weighs again his options, and comes to deal with the compulsory fallout. No, none of this is probed very deeply, and The Brother From Another Planet is not even close to broaching the sort of greatness that John Sayles’s later films would, but it’s technically well-wrought, and manages to anthropomorphize a being that is neither human, nor ever given the opportunity to speak. The latter is the more important vis-a-vis the artistic arc, for it ensures the film’s demands must be picked up by Morton, himself, through his emotive glances, subtle gestures, as well as Sayle’s occasionally brilliant writing. And this brilliance (sporadic as it is) comes through in many places: from the choice to have Morton’s character first appear in a nigh-abandoned building with a dark, extraterrestrial feel, to Virgil’s ‘tour of the night,’ which could have so easily devolved to mere political posturing, yet exposes, instead, the sort of intellectual fraud that nips at the credibility of black communities, and even in the film’s depiction (one of the first and deepest in art, really) of a videogame otaku, whose addiction is given an oddly effective philosophic thrust. These are the sorts of ideas the film touches upon, satirizing white people, black people, and the personages from ALL camps that claim to be each other’s intermediaries.

The film’s basic thrust is this. An extraterrestrial (Joe Morton) crash-lands on Earth, takes on (or already has?) the appearance of a black man, finds himself in what appears to be a noisy, unfathomable landscape, and must learn to become a resident of Harlem all the while lacking the ability to speak. He has, naturally, a few alien features: 3 toes, an ability to heal wounds, fix broken machinery, remove his own eyes, and understand language. Yet his emotions and his plight are basically human, so that when he gets tracked down by two slave-hunters (both are white, and one is played by John Sayles), his reactions are immediately vocable, and his friendships — forged with the men of Odell’s (Steve James) bar — are essentially men’s bonds. And, yes, this includes his love for a woman: a love that seems somehow ‘new’ to him, whether due to the freshness of the relationship itself, or because that love is a totally alien concept for Morton: two possibilities that are never really differentiated, and therefore make him quite child-like, and quite easy to empathize with. 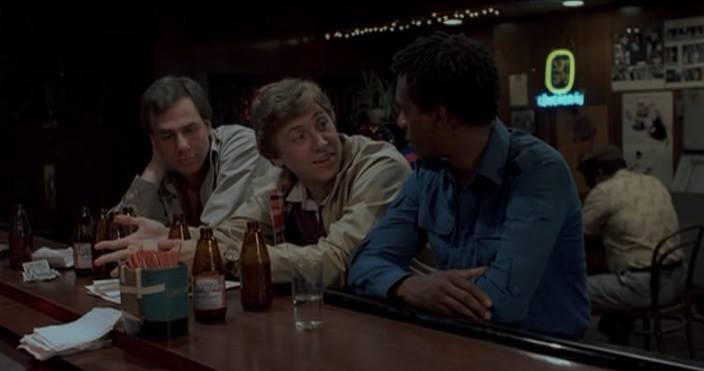 John Sayles puts some goofballs in their place.

In fact, it is really Morton’s performance that drives a great deal of The Brother From Another Planet. Given that this was an early film, John Sayles was likely figuring out some of the fundaments of scripting, pacing, and the like, but was lucky enough to get Joe Morton in the role. Even more importantly, however, Sayles was wise enough to keep the man silent, thereby eliding most words without necessarily diminishing communication, itself — the REAL reason for such words, anyway. One sees, for instance, Morton’s reaction at dropping on Earth: he is frightened at the cacophonous sounds, he is unsure, for example, when he looks down into subway entrances — re-arranged, in the viewer’s mind, as something altogether exotic, as if to be seen anew — confused by white people’s desire to get ‘closer’ to him (such as in a hilarious scene wherein two men visiting Columbia get lost in Harlem, and confess their racial hang-ups over a beer), and he is baffled by men’s violence, even if this violence seems to be the norm on his own planet. Yet perhaps the best thing of all is how Morton’s mere presence utterly forces other characters to blather, whether it’s Morton’s girlfriend, who practically talks to herself at times, or the bar-men’s tall tales, spoken for no other reason than speaking, or the white duo’s monologues, masquerading as genuine engagement with others, merely because Morton is silent, and therefore a kind of receptacle for people’s neuroses. For, indeed, when we hear two liberals insist “…if people would just sit down and talk like this more often,” we really know they don’t mean ‘to have a conversation.’ That just isn’t how people operate, and by shedding a little light on these delusions, John Sayles shows what lies opposite, as well.

Nor are the film’s other, deeper elements ignored by Sayles or Morton. I’ve already mentioned Virgil’s (Yves Rene) appearance, above, but as his scene is quite possibly the film’s best, it needs a little more explication. It begins after Morton experiments with a used heroin needle, collapses, and is awoken by Virgil in a Dante-like tour of Harlem. Interestingly, Virgil walks and talks like a pimp, yet replaces the expected trill with references to “capital,” “Babylon,” and “oppression” in a Rasta-cum-Marxist monologue that ends with Morton puffing on a joint with a few other potheads, as Virgil promises a kind of freedom. “This place is not your own,” Virgil quips, not realizing the full import of his words. “Take the shit back. Just for one night, take the shit back to the promised land.” So, does Morton get his release? No. He simply wakes up the next morning with his shoes gone, the implicit route of ALL such confused philosophies, and the silliness they engender.

Nor is this limited to politics, either, for on a purely interpersonal level, one sees what people are capable of as well, via Morton’s clear-eyed glances in their direction. In one wonderful little touch, for instance, Morton’s love-to-be has just finished singing at a club, sees him at a table, and asks him to pretend to be her lover so that she could avoid the attentions of the creepy club owner and one-time fan of the singer’s work, back when she was still famous. The club owner’s advances are rebuffed, and, feeling a bit bruised, delivers some of the film’s most cutting lines: “You know, it’s funny how when one is shooting up, the other’s tumbling down,” he tells the former star. “Must be a law of nature. But there’s always some point when the one shooting up and the one tumbling down is on the same level — even if it’s just for one little second…” That second, it seems, is now, but Morton comes to understand that, despite the unassailable logic of the man’s claims, humans do have one peculiar advantage: they can close their eyes to such, and choose to not participate. Perhaps it’s not an option that Morton’s character ever really had himself, but he is a man, like I’ve said, and so he is learning. 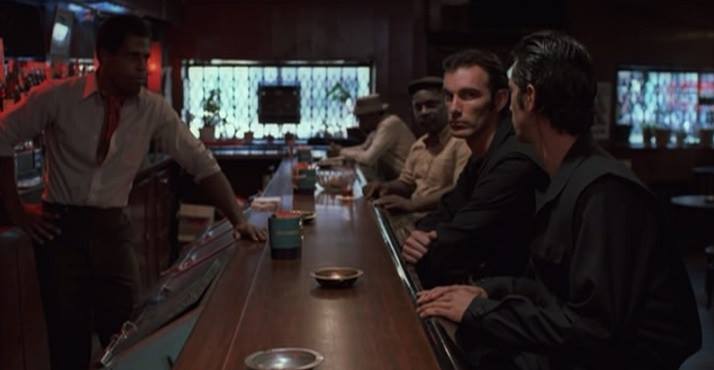 The obviousness of the slave hunters is a weaker element of the film.

Yet for all that, the film is not without its flaws. It can be subtle, yes, but it can also hammer home its points in a way that downright condescends to the viewer. One sees, for instance, Joe Morton in an exhibit of Harriet Tubman artifacts as he’s being hunted, all the while there’s a lecture on slavery and freedom going on in the background. In other scenes, the film is hindered by the cheapness of its action, such as during the bar fight — not really a bad thing per se, but combined with the fact that the film is always on the cusp of genuine depth and is never really sure whether it’s a serious satire or a mixed comedy of sorts, can give it a slapped-together quality as opposed to a film that can crystallize into something singular.

The Brother From Another Planet ends with the defeat of the two alien hunters, but just as it’s never made clear whether in fact they die on-scene or merely give up and go, it is never revealed who these men were, in the most basic sense, and what their (and Morton’s) appearances represent. Sure, we see the hunters as white and Morton as black, and this is clearly satirical, but there’s more to this than meets the eye. Is Morton black by pure luck, with his true appearance altogether different, or does he ‘become’ black by entering Harlem, wherein his back-at-home qualities (hunted, oppressed, rebellious) are translated into a form that’s consistent with Earth’s history, thus allowing Morton to more easily blend in? This question, of course, is never really answered, but just as with the last few shots of Morton staring ahead, it doesn’t have to be. It’s enough that the implications are there. The rest can be left to the viewer’s imbuing, and Sayles, to his credit, has never feared this.

[A version of this article first appeared on the Hackwriters website on 12/8/2014.]

Virgil’s ‘tour of the night’ is one of the film’s strongest scenes partly because Sayles does not give into stereotypes on either side, even when he sets things up to trick the viewer into expecting such.

A white kid does the ‘Sam The Bellhop’ card trick to Morton’s confusion. Here’s a kid who’s inured to race set against someone with no real conception of it: