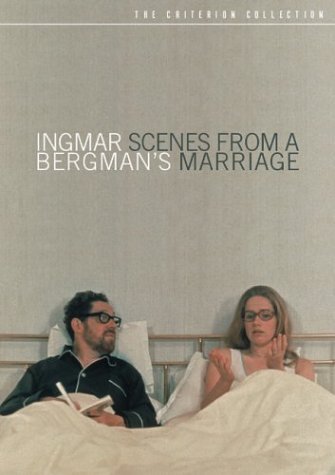 Yesterday afternoon, I was at the New York Theatre Workshop’s performance of Ingmar Bergman’s Scenes From A Marriage (trans. Emily Mann), which boasts a run-time similar to the original film’s. This makes sense, as Scenes is a film that naturally lends itself to theater: it mostly takes place in simple interiors, focuses on long, involved scenes — often involving just 2 characters — and draws much of its power from the gestures, expressions, body language, and intonations that, alongside the great writing, really drives the narrative forward. No, it is not superficially dependent upon its visuals (like many purportedly ‘visual’ films are), but there was as much in Liv Ullman and Erland Josephson’s expressiveness as in, say, an Antonioni landscape, that gave Scenes From A Marriage a depth that lesser actors would have merely occluded.

Ivo van Hove‘s play, however, is not the film, and judging the play for what it’s NOT would be a critical faux pas from which there is simply no return. So, what is it, exactly, and what is its relationship with Bergman? Well, it takes many of the film’s key scenes — the discovery of Johan’s infidelity, the dinner with Peter and Katarina, Marianne’s pregnancy, and a few others — and splits them out of order, into an arbitrary sequence played by a revolving door of actors. For the first 2 hours, these scenes play out simultaneously to smaller groups, which are separated by a couple of thin walls through which the music, shouting, and action of earlier/later scenes is still audible. The viewers witness whichever scene they happened to have sat down to, and move every 30-40 minutes to a new scene while the others re-play for new audience members. This goes on until the intermission, after which all the lead actors come together, as 3 Johan/Marianne duos, to act out the next part simultaneously, first taking turns with lines before climaxing into a rumble (as per the film’s divorce scene) that has everyone merely shouting at one another in an odd, anomic scene that left at least a few audience members frustrated and aghast.

Some of this works because, instead of merely aping Bergman, it clarifies, in its own way, a central posit of the original film: that Johan and Marianne are not merely a unique couple going through unique problems, but despite being very real and ‘particular,’ themselves, are representative of many similar relationships, which thrive and die according to the same patterns — details be damned! The play does this by using different actors and actresses for each scene, making the viewer viscerally feel that these are ALL different couples, with the verbiage and action coming from next door almost like similar fights that might be going on elsewhere, and perpetually. The scenes, too, are split in a way that — despite the re-use of the leads’ fictive names — there is little real continuity from one scene to the next, as the play takes the film title quite literally. In short, these are slices from a life (or many lives), as opposed to a comprehensive look at one marriage that can be extrapolated to others.

Yet all these innovations — fractured narrative, multiple variations of one character, the odd coalition of scenes — are merely ideas, marred, as they are, by deeper problems. The biggest issues by far are the structural anomie and, at times, the poor acting, the latter of which takes the film’s subtleties of expression and intonation, and runs them through theatrics that, oddly enough, oscillate between older, upper class Swedish mannerisms, and almost fad-like American speech that allows little real consistency, sometimes even in the same scene. Nor does it help that some actors look to be in their late 20s or early 30s, all the while portraying a mature couple with children, careers, and a sense of world and self that — however warped — is much closer to middle age than not. Too often, Bergman’s rich, poetic lines are defanged either by poor pacing, wherein little time is given for the words to sink in, hurried, as the cast is, to get through all of the material, or by director Ivo van Hove’s inappropriate stage directions. Marianne, for instance, makes faux sad faces as Johan talks of his own infidelity and Paula’s ‘pitiable’ life, thus simplifying a scene with many complex emotions into a few smaller ones that, to help fill these newly-made gaps, is given a more comic edge. No, this is not a bad thing, on its own, but since these 2 characters have been ripped from an otherwise deeper context, with the build-up and tension inherent in such, and replaced with jokes, it is hard to feel much empathy in the narrows of what the viewer is provided. Other parts, such as the two leads’ final conversation in their friends’ country house, are marred by ill-placed gestures (such as a humorous kick while Marianne is lying around, thus deflating what’s in fact being said) and over-the-top script changes (such as Johan’s self-consciously bad, extended dance sequence while Marianne is asleep) that have no relationship to anything that precedes or follows, thus coming off as pretense without the requisite delivery. And that lack of delivery, NOT the pretense, itself, is what fails over and over again, within.

Thus, despite Ivo van Hove’s decision to INTERPRET the film, he is, at times, merely imitating it, but without the original actors’ great strengths, falls flat in the attempt and torpedoes his own ambition. Yet the opposite is true, as well, as in the film’s worst liberty: the appearance of the 3 duos together for the first time after the intermission, and the shouting match that erupts. Yes, it captures Bergman’s original energy — or rather, its aftermath, for we’re not shown much buildup — but the director forgets (as he does elsewhere) that he’s in the midst of an interpretation. Removed from the deeper context of the film, he must acclimate to what is present and new and thus work within these parameters. Instead, he takes the key divorce scene, whose strength lies is in the gradual, intimate build-up to violence (both outward and personal), and forces the duos to merely scream at one another for 20+ minutes, at some distance, both literal and figurative, until they’re sweating, tired, and ready to sign the papers. This is not a deeper, emotive release, but a purely physical one, since the mind can’t process so much data without it coming across as haphazard, and thus feels ‘good’ — in the superficial sense — when it’s over. It’s a problem because there’s no ‘IN’ to these characters, in the first place, whereas some prior establishment of who these people are — whether the rich and fleshed-out Marianne and Johan of Scenes, or new entities altogether — might have let the director get away with such a move. Indeed, it’s one thing to hook the audience, first, and THEN ask them to follow you someplace dubious and new, but a whole other issue when you give proffer mere chaos with so little recompense immediately before or after.

The cast, as might be imagined, is an ensemble, and Tina Benko’s Marianne suffers from the sorts of gestures and simplifications I’ve described, Emma Ramos’s Eva (Johan’s co-worker) is melodramatic when it’s more hard-hitting to be manipulative, and Arliss Howard (of Full Metal Jacket fame) is oddly feminine in scenes that require a little cruelty. Howard’s issue, then, is not acting per se, but presence, especially when, in his dance routine, he goes even further afield of his own character for the sake of something not even the director could really guess at. In fact, the play’s best actor is Mia Katigbak, via Mrs. Jacobi, who is appropriately subdued, pointedly ignores some of Marianne’s more aggressive overtures, and does things that more or less work within the limits of her small role.

Yet despite the fact that the play fails as either an imitation OR interpretation of Scenes From A Marriage, it does, if only by mere accident, offer some cues for the future. It is obvious that as art becomes a little more reflexive and interactive, many of the short-lived, pointless experimentation that we see today will disappear. They are gimmicks, fads, and offer little except mere novelty, as this play’s eventual breakdown shows. But this is only to be expected, since we’re dealing with artists who’ve been schooled in the ‘new way’ by people who don’t really understand art, in the first place, much less the great art they wish to draw some strength from. In time, as this unfortunate cycle comes to an end, these techniques will be rehabilitated into something better, by people with the knowledge and talent to actually do this convincingly. For now, however, most young artists will be playthings — both OF the art-forms they don’t really get, and of themselves, as they diddle away to satisfy a curiosity that, while noble, can never be executed in such hands.

2 Comments → Review Of “Scenes From A Marriage,” via The New York Theatre Workshop