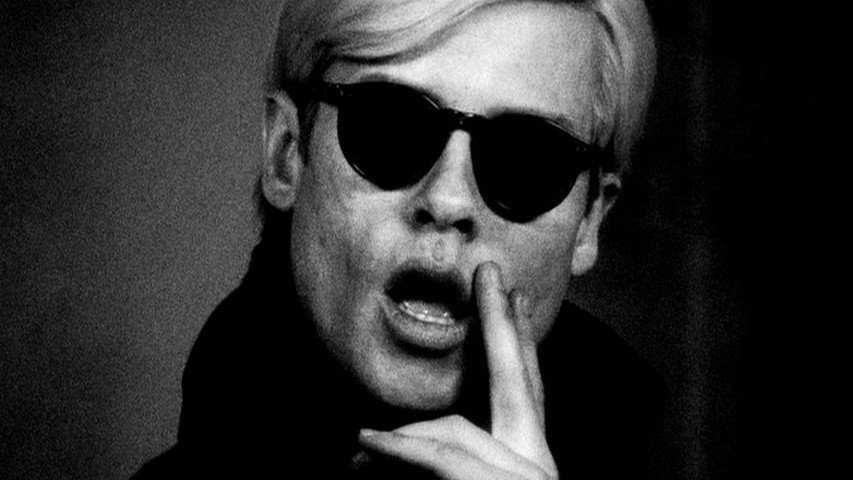 Andy Warhol In His Pose. (c) Rebels In Tradition

Prior to going any further, let me just get this out of the way. No, I would not consider Andy Warhol a very good artist, much less a great one. And, yes, his biggest claims to fame — repetition, mass production, irony, the overuse of color — merely took one or two ideas that MIGHT have worked as part of a smaller series, and made an entire life’s work of it, as opposed to a short, controlled burst of activity that would have been far easier to justify.

In short, this is the equivalent of having a single, minor idea, not being happy with its general lack of application, and therefore deciding to write the same 1,200 page book about it, a hundred times over, albeit with slightly different formatting at each go. Obviously, painting some banal object, or re-touching someone else’s photo, over and over again, can only take an artist so far, ending, as it does, precisely where the work ends: a colored image of a bad actress or dictator, or an ode to the commonness of soup — and the ‘deeper’ (I use this word lightly) reactions to said commonness. Sure, one can think of far worse paintings and/or statements, but this, by itself, does not ameliorate the real issue. It only reveals how easily confused the public is, manipulated, as it is, by artists who consider themselves above the sort of pettiness that they in fact engage in, thus taking the heat away from their own lacks.

Yet there’s another side to Warhol, as well. Unlike, say, the repetition of a Jackson Pollock, or the self-serving ‘explanations’ (if they can even be termed such) of a Mark Rothko, Andy Warhol had an advantage that these other folks did not. And I don’t just mean talent, because Warhol, in his ‘serious’ moments, was far more penetrating re: the arts, and FAR more self-aware when it came to his place there — including the transience of his own position, and what it says not only of other artists, but of the consumers who respond to such.

And, naturally, these responses aren’t very pretty. A couple of months ago, I watched a few documentaries on Warhol, including a 3 hour doc (“The Complete Picture”) and a better, 4 hour one. Yet I use the word ‘better’ loosely, since the only real reason why the 4 hour doc was better was stylistic — on top of the fact that it actually quoted a great deal from Warhol, who could be very interesting to listen to, at times. In fact, the primary drawback of both is their overuse of talking-heads, and especially clueless talking-heads that, in their admiration of Warhol, offer no real criticism, no original insight, and merely take Warhol’s art at face value, raving about the color saturation of this or that photo, or throwing around terms and judgments that, if one merely has eyes, clearly ill apply to the subject at hand. It’s a terrible thing to watch, really, but instructive, for in this sort of behavior are the seeds of Warhol’s importance — even if, ultimately, it has little to do with the art, itself.

That’s because in the history of the 20th century, few artists have been as ‘celebrated’ as Warhol, or as culturally relevant. There was, early on, Picasso, but Picasso was a genuinely great artist, and influential in the permanent sense — that is, helping to usher in a revolution in art that, for decades and even centuries hence, will continue to affect the way that artists communicate. As for Pollock, Rothko, et al.: certainly influential, but transiently so, in the same way that a bad pop singer might be influential, but merely blip in and out of the present and future with no real after-effects. So it is with Abstract Expressionism, a kind of stain in art history that, over time, will be washed and re-washed until one will finally look upon at the faded color, and not even remember how it got there, or what the hell it was. Blip!

Not so with Warhol, however, who, one or two centuries hence, will merely be seen as a sign of the way that people respond to art, on a purely social level, not only via his own then-mostly-forgotten pieces, but through the sort of phenomena he helped unleash, such as The Factory and other hot-spots that artists might congregate around. The difference, of course, is that not only did Warhol create these spaces, but that he manipulated (almost single-handedly) the sort of conflicts, events, and media attention they’d engender, playing artists against one another, or offering some subtle but inflammatory word or two in the hopes of getting a ‘reaction’ from this or that hothead. This is not, of course, the behavior of an idiot, but of someone in control, and hyper-aware of how artists, especially BAD artists, might function, what they value, and what they might respond to the most, and why. Here was a group of people taking themselves quite seriously, and here was Warhol as a corrective, even if, in a sense, he was the biggest bullshitter of them all.

In a way, then, Warhol can be said to represent a kind of final stage before art’s next (and, up until then, GREATEST) revolution: that of self-awareness. But while Warhol’s self-awareness was limited to social issues, psychological fluff, and the cross-currents of art, business, and personality, art, as a whole, will REALLY move forward when its artists finally realize what they are doing, and be able to replicate great material at will. It won’t be guess-work any more, it won’t be instinct, and perhaps, in time, it will even be void of the sort of the exaggerated personalities we’ve come to expect from the art world. At that point, Warhol will, quite naturally, be relegated to the status of a ‘curio,’ and that’s that. Yet he will have been there, first, no matter how bad his intentions were, at times, or how mis-aligned with the goals of true art and genuine communication. This, unfortunately, is how life comes — as a confluence of trajectories, rather than a single, indomitable line. That’s why Warhol is important, even if his art is, or will be, quite tertiary.

Prior to signing off, however, I’ll leave you with a few choice quotes from Warhol. Now, say what you will of his talent, but he certainly knew what the hell was going on in other regards:

“Naturally, the Factory had fags; we were in the entertainment business and — That’s Entertainment!”

“Candy [a transvestite] didn’t want to be a perfect woman– that would be too simple, and besides it would give her away. What she wanted was to be a woman with all the little problems that a woman has to deal with — runs in her stocking, runny mascara, men that left her. She would even ask to borrow Tampaxes, explaining that she had a terrible emergency. It was as if the more real she could make the little problems, the less real the big one — her cock — would be.”

“We’d sit in gardens or sidewalk cafes for hours, and I’d listen to everyone discuss abstract things like whether some new person was ‘definitive’ enough to become a superstar or whether someone else was too ‘self-absorbed’ or ‘self-destructive’. I was fascinated by the way people could read so much into so many things, but then you never knew if you were getting to know the person or getting to know the drug they were on.”

“Before I was shot, I always believed I was watching TV instead of living life. Right when I was being shot, I knew I was watching television. Since I was shot, everything is such a dream to me. I don’t know whether or not I’m really alive, whether I died. It’s sad. Life is a dream– I wasn’t afraid before. And having died once, I shouldn’t feel fear. But I’m afraid. I don’t understand why. I’m afraid of God alone, and I wasn’t before.”

“Dying is the most embarrassing thing that can ever happen to you, because someone’s gotta take care of all your details. You’ve died, and someone’s gotta take care of the body, make the funeral arrangements, pick out the casket and the service, and the cemetery, and the clothes for you to wear, and get someone to style you and do the makeup. You’d like to help them, and most of all, you’d like to do the whole thing yourself. But you’re dead, so you can’t. Here you’ve spent your whole life trying to make enough money to take care of yourself, so you won’t bother anybody else with your problems. And then you wind up dumping the biggest problem ever into somebody else’s lap. It’s a shame. I never understood why when you died, you didn’t just vanish, and everything could just keep going the way it was– only you just wouldn’t be there.”

“It was so strange, I thought: you get to the point in life where you’re actually invited to the party of parties– the one people all over the world were trying desperately to get invited to– and it still didn’t guarantee that you wouldn’t feel like a dud! I wondered if anybody ever achieves an attitude where nothing and nobody can ever intimidate them. I thought, ‘Does the president of the United States ever feel out of place? Does Liz Taylor? Does Picasso? Does the queen of England? Or do they always feel equal to anyone and anything?”

15 Comments → Some Things Of Andy Warhol