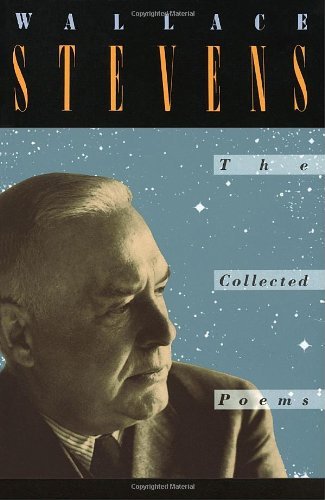 [Listen to my reading of the poem here.]

Wallace Stevens is not only one of the 5 or 6 greatest poets to have ever lived, but — after years of being nigh-impenetrable to me, as a teenager — has become one of my favorites, too. He can be beautiful without emotion, and he can be emotional with nothing but an intellectual base. Too often, such things are treated as mutually exclusive, when in fact, one can simply be a route to the other, with Stevens’s choice of ‘intellect first’ generating some interesting effects. After all, if you erase emotion — at least in the literal sense — yet still write in a way that the reader utterly wallows in it, what does this say except that the intellect is, paradoxically, one way into the heart? (And I’d argue it’s the superior route.)

No, I wouldn’t go as far as calling Wallace Stevens a “dead end” in poetry (as Emily Dickinson was, or parts of Gerard Manley Hopkins and William Blake were), but prior to Wallace Stevens’s ascent, there were few that resembled him, at least in this regard. At best, there were prototypes — perhaps in some of the direct treatment of the Chinese classical writers, some parts of Ezra Pound, something of Yeats in mid-line, or Rainer Maria Rilke, who might in fact be the closest to him of all great contemporaneous writers. Yet Stevens still reads like an aberration, and MANY writers of the last few decades have tried to emulate him. I know, because whenever I open a given poetry book — usually forgotten after a few years’ time — there are the inevitable Stevens rip-offs, since many assume that merely writing ABOUT ideas (as Stevens did) is the same as writing about them WELL (which few ever do). In such cases, jargon takes place of real language, and broken prose for genuine music, since it is those things that, unfortunately, are presently associated with ideational heft.

Yet here’s an example of the above done right, and how emotion can come in roundabout ways, even when dealing with topics that, at first glance, seem to have no real connection with human experience:

A Rabbit As King Of The Ghosts

The difficulty to think at the end of day,
When the shapeless shadow covers the sun
And nothing is left except light on your fur —

There was the cat slopping its milk all day,
Fat cat, red tongue, green mind, white milk
And August the most peaceful month.

To be, in the grass, in the peacefullest time,
Without that monument of cat,
The cat forgotten on the moon;

And to feel that the light is a rabbit-light,
In which everything is meant for you
And nothing need be explained;

Then there is nothing to think of. It comes of itself;
And east rushes west and west rushes down,
No matter. The grass is full

And full of yourself. The trees around are for you,
The whole of the wideness of night is for you,
A self that touches all edges,

You become a self that fills the four corners of night.
The red cat hides away in the fur-light
And there you are humped high, humped up,

You are humped higher and higher, black as stone —
You sit with your head like a carving in space
And the little green cat is a bug in the grass.

This is a great poem, for many reasons, and touches on the issues, above. Look at the very first line — it starts off as a posit, as if part of a further argument, but can be taken as a mere statement of fact. And the music’s already there, impossible, as it is, to read it without the pauses the lodge the image of “the end of day” within the reader’s mind. The next line, of “shapeless shadow covers the sun,” can, to a human percipient, refer to a cloud, or mere night-fall. Yet by the time we get to the last line of the stanza, the addressee is clearly the rabbit of the poem’s title, to whom the “shapeless shadow” is probably far more remote in look and meaning. Keep this in mind as the poem goes on.

The second stanza begins with an image that, to the newly-discovered addressee, must be disturbing: a cat with a milk-bowl, who must be watched for. The following line, I presume, caricatures the cat as he probably exists in the rabbit’s mind, via absurd or even slightly grotesque imagery, jarringly set next to “August the most peaceful month.” Notice how, in this last line, the unconventional syntax drives the image home, with “August” almost becoming an after-thought next to the casual, almost unfinished statement. Yet after the stanza’s many commas, the reader WANTS a pause, and gets it in a way that’s a close as opposed to a full-stop, for it is subtly picked up again later. Not the sort of choices the MFA poetry hacks ever really think about when they think they’re being ‘like’ Wallace Stevens!

The commas return in the third stanza, with “peacefullest” mirroring the previous usage, as well, as the stanza brings us to night-time. The cat becomes “that monument of cat” — a great phrasing, for while sticking to the limits of a rabbit’s own ken, it nonetheless calls up the reader’s own fears. “Monument” can be anything, really, for it’s something that looms large, and works upon the emotions, even as it’s stated unemotively. This is where Stevens’s use of intellect starts to open up the flood-gates to emotion, not really by Stevens’s own doing, but simply by his understanding that, with a careful enough reader, such connections are inevitable. “The cat forgotten on the moon” is likewise another great phrasing, for it not only reinforces the previous images of night, it also subtly invokes the emotion once more by giving the rabbit a child-like quality the reader can easily attune to: that, with night, or with the closing of one’s eyes, the world’s evils can disappear, as well. That Stevens is so direct here, leaving the cat “on the moon,” also gives the thought an alien quality that more realistically aligns with what another creature might feel, in its own cloudy, purely instinctual way, as opposed to a thinking human. Yet, oddly enough, the thought is immediately known and understood, regardless.

Emotions continue, by way of intellect, and the poem only deepens. “And to feel that the light is a rabbit light,/ In which everything is meant for you/ And nothing need be explained” is one of my favorite passages in all of poetry. It takes the poem’s subtle invocations of childhood and expands them even further, as kids — and people, in general — might, in a moment of distress, wish to regress to a place where everything is theirs: that the light is theirs, that they are protected by their surrounds, and that nothing needs a word or cue. Is this turning to one’s parent? A favorite hiding place? A certain thought? It doesn’t really matter, for the function is the same, and — again — oddly believable, given that we’re dealing with a rabbit. Yet, as before, it is a primitive sort of thinking that we can connect to.

Next stanzas are a clarification of the same, as the rabbit is brought back to the physical plane: “The grass is full/ And full of yourself,” a wonderful little inversion that does both things within only a few syllables. The rabbit is further comforted, and the line “the four corners of night” remains a great touch, not only in how declaratively it all ends, but how night — again, as with a child — is simplified to merely 4 corners, for this is the extent to which such primitives can see things. The cat, in time, completely disappears, the night gives free rein to the rabbit, to the point that the rabbit seems to occlude the very sky, and the cat — asleep, perhaps? a mere memory? — is now “a bug in the grass.”

Yet for all that, one gets the feeling, upon reading and re-reading, that the poem is not merely talking of a rabbit’s feelings, or even a child’s, but people’s, in general. Those 4 corners of the night? They might as well be how human beings interpret their own existence, limited (and limiting) as they are, when it comes to their own knowledge of things. I am reminded of passages from Loren Eiseley, who wondered what a spider might have thought when he stuck a pencil into its web. Did he notice it? Could such an intrusion even be conceptualized? And if we, ourselves, are constantly being intruded upon by things we can’t quite see, for just as we’re motes to the spider, the cat a “monument” to the rabbit, and night-time a simple, angled tier — as the poem’s addressee reveals — it’s just as possible, then, that ‘we’ are not the subjects we think ourselves to be.

And this, to me, is the crux of this Wallace Stevens poem, for it deals with knowledge in a roundabout way that calls up emotion without even really doing so. It doesn’t signpost its meaning; it simply ORCHESTRATES it — the real difference, of course, between Wallace Stevens and his imitators.

As time goes on, I’ll update this site with more Stevens poems, and more analyses. In the meantime, have another read, for what is shown here is on display with pretty much every other great poem, even if the ‘how’ of getting to such is marginally different.

6 Comments → Wallace Stevens: “A Rabbit As King Of The Ghosts”