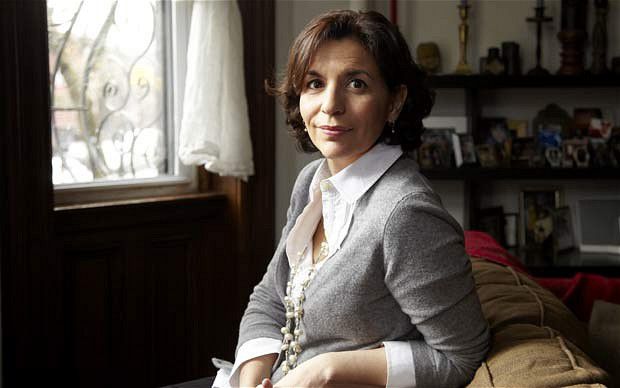 R.J. Palacio. Image via The Telegraph.

Near the end of R.J. Palacio’s Wonder, an interesting — nay, emblematic — thing starts to happen. Just when Auggie, the book’s friendless, deformed, 5th-grade hero gets all the abuse that he could possibly stand, a mildness comes over the other children. Perhaps this is because Auggie finally stands up for himself. Perhaps it is because the popular girl befriends him, then ‘risks all’ to stand by him. Or perhaps it is something altogether stranger, less definable, in the way that a mob might rise and go despite still suckling at their accumulated aims. Yet none of this matters, really, for Auggie gets friends, a possible romantic interest, and even receives the school’s most prestigious award for — well, for survival, I guess, despite not doing much to earn it. He gets, in short, the sort of rich fantasy life that every bullied ‘loser’ must on some level entertain. The only difference, here, is that nothing is imagined, for there are just too many hands (of adults, kids, God) laying it all out on a platter.

Now, I’ve wondered how this could be; how a children’s book that purports to teach kids about life prepares them for nothing but its bowdlerization. There are, I suppose, many answers to this, but the short one is that condescension, for all intents and purposes, is dead. No one cares to talk ‘up’ to anyone, for everyone, we are reminded, is corralled into ghettos of both mind and place. No one really understands dilution (of compliments, emotion), for what was once an end, and very much ‘the’ end, is now a means to something vaguely therapeutic. No one wants to hear of inborn talent unless it is doled out and democratized for all. Yes, this is pure condescension — all of it — but when few care about the word and how it applies to things, when it ceases to be something that is feared, defended against, rebuked — then it is dead, for it has entered into the body as an autonomic impulse rather than a choice.

Of course, Palacio’s badly written, badly edited, tin-eared, and poorly thought-out book is not the problem. The real problem is that someone decided to bring this book into schools, and schools, always so very sensitive to trends, decided to teach it, and teachers, wanting to believe the best of their kids, simply bought it, and kids, being kids, nodded their heads at the book’s various ‘lessons,’ and went back to a far more bitter reality — often with glee. In fact, Wonder’s peculiar brand of irreality has been making inroads for decades, now, as people were slowly brought in from the margins (into schools, jobs, relationships) and, lacking skills or any way to make their worth tangible to the real world, they were simplified rather than dealt with, to the point that our innate differences were quietly erased. In this arrangement, human nature becomes mere piffle — a ‘debate,’ even — and motives break down to what’s most affable, and easily understood. Underdogs, too, are put into increasingly unlikely situations, and while the concept of ‘the underdog’ is quite important for human progress, it is now, for the first time, mistaken for everyday life. In this way, it’s not enough that every loser may aspire. They must win, as well, for good triumphs, and not in the long-term or abstract sense, but here and now, and now, and then.

As for the kids, post-pedagogy? I’ve seen them, and they still fight and tear each other down. They go for weaknesses and sore spots. At times, it can be thoughtless; automatic. At others, they wait, patiently, for maximum hurt. No one has won any awards, and many grow quite angry if they’re complimented for something worthless, for they know themselves, and — this is important — they know others, too. Yet this last part is thought to be in need of correcting, as if it’s a mere sickness or self-hatred. More likely, it is an honest attempt to come to terms with one’s limits, and what is and is not real in the ways that we typically understand such words. To be sure, no self-respecting child is OK with the sort of award that Auggie won, and few are dumb enough to fall for the trap — a trap, in fact, that’s laid by adults for everyone else around them, as a means to ‘protect’ and better apportion hurt.

This is fine, I guess, except for the fact that condescension, as a rule, does not respect its target, and target-practice, on the whole, doesn’t make for very good protection. Sure, you might miss the first couple of shots, but what then, and what of the long view? And that’s the problem, really, with trends, ideology, and best-selling books: you just don’t know what’s underneath them, nor how little will remain when they expire. For I have known Auggies in my life, and have seen the way that they get wrung out and compacted. They do not have friends to love them, nor popular girls to help transition them to puberty. They have but a small handful of certainties, and the more intelligent among them will learn to exploit such patterns. As for the rest? I want to hear their story, because it will not feel good, and this will feel right.