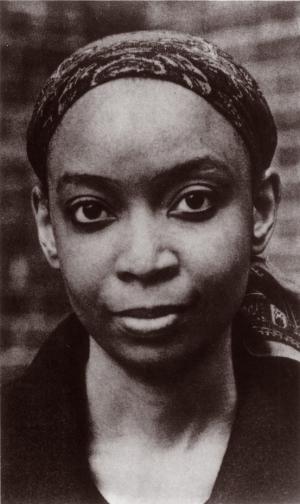 Gayl Jones, via University Of Michigan

In brief, Gayl Jones’s The Healing is not a book of many faults. Rather, it’s a book of a few monstrous faults repeated ad nauseum on almost every page. I haven’t read Jones’s other novels such as the lauded Corregidora and Eva’s Man, so, to be fair, I won’t comment on her talent as a whole, but stick to the clichés, ill-wrought dialogue, bloated, pointless description, and intellectual dearth specific to the novel at hand.

At the very least, I know Gayl Jones’s other novels are very different stylistically, which means, if she does lack quality, she might still have some diversity across her work. Thus, it’s probably not so much that Jones is talentless as she is lazy. And perhaps that’s the worst misdeed writers commit. A lack of talent is nobody’s fault and making fun of well-meaning passion is a bit cruel, even if accurate. Pure laziness, however, disrespects both writer and reader – I don’t want, for example, an artist to think me stupid enough to assume there is a reason behind every little miscalculation, the demesne and crutch of bad writers who use bad philosophy to justify bad art. Consider, for instance, the specifics of the plot. Harlan Eagleton, a folk healer, manages a minor but respected rock star named Joan Savage, travels all over the world, has affairs, and offers small observations about pretty much everything imaginable. She is eventually stabbed for “betrayal” by her former rock star. In a way, then, its peculiarities of detail and structure are similar to Jonathan Safran Foer’s Everything Is Illuminated, but while that book often makes good use of dialogue, irony, humor, and juxtaposition to talk about a familiar subject, the holocaust, in a unique way, The Healing simply drowns in details neither deep nor evocative. I suppose, then, the philosophical justification for such pap is the postmodern obsession with “multiple perspectives,” as Jones, in a way, does just that. She discusses, sometimes for pages on end, every little thing a character says or comes across, but reveals nothing in the process, not in the substance, and not in the construction. In fact, it’s the most obvious fault of the book – its utter pointlessness not only from page to page, but how little it actually says as a whole.

A couple of examples will suffice. The first paragraph, a bit over a page, sets the tone:

I open a tin of Spirit of Scandinavia sardines, floating in mustard sauce. The woman on the bus beside me grunts and leans toward the aisle. She’s a smallish, youngish, short-haired woman, small Gypsy earrings in her ears, looks kinda familiar. I offer her some of them sardines, but she grunts and leans farther toward the aisle. I nibble the sardines with one of those small plastic forks and stare out the window. The sun hitting the window makes a rainbow across a field of straw pyramids. There’s a few horses and cows grazing in the meadow, a whitewashed barn and a farmhouse, one of them three-story farmhouses, and there’s one of them little tin-roofed sheds built onto the farmhouse. It looks like one of them painted scenes, you know the sorta landscape paintings you can buy at them flea markets. Or the sort of landscapes that you see on television, where the different artists teach you how to paint pictures. You can learn how to paint pictures in oil or watercolor, and they teach you the secrets of painting and make it seem like almost anyone can be an artist, at least be able to paint pictures in their style of painting…

If you think it’s building up toward some grand metaphor, you’re right. The obsession with sardines is capped by a forced analogy to the Middle Passage to feign depth and to provide a “startling” image that, supposedly, I ought to have never heard before: slaves packed together like sardines. Moreover, look at how uninteresting the actual description is. It’s functional and unpoetic, and while in many contexts this can be done well, there’s no scene or juxtaposition to play off of. The details are simply there. At least the details are somehow used as the novel jumps from point to undeveloped point, from sardines to popular painting, back to sardines, to slaves, to Harlan’s healing, to Moroccan leather, to Gucci, to mosquitoes, to a laundry list of American magazines, to skepticism, and then to “tank towns” – all within 3 1/2 pages, none of it in any way connected, except through the chaos of the narrator’s mind. Elsewhere, Joan is being introduced on stage. The comedian, to get the crowd pumped, goes on for a couple of pages about the word bitch, and why some women hate being called bitches, even if they are bitches, and how his own wife is a bitch, and so on, repeating the word, with no point whatsoever, about 40 times. And so on. Sure, this does reflect reality. People do think and speak this way. But, art is not chaos, nor is it necessarily about reality, at least not in a crude sense. It’s pattern. Realistic situations can arise, but if they are presented in an evocative way, full of irony or juxtaposition or even some insightful commentary, there’s a depth not present in ordinary experience, even if the characters are unaware of the artist’s machinations. Instead, Gayl Jones is manipulated by her own characters. She gives in, lets them run wild, say and do whatever they please, think haphazardly, and lazily jots it all down as a polished product. Frankly, even if you’d strip the novel to its bare essence, there would be little here. No grand idea, no movement to any compelling direction, and just a plot with potential. Yet, it’s notoriously easy to think of a good plot, which is why thrillers are published by the thousands. It’s how you get there, and the deeper stuff revealed, that is art.

Given all of this, the characterization is practically nonexistent. It’s ironic that postmodern books, from the abject trash of Ishmael Reed to the weary stuff of Toni Morrison, although touting their own “density” and “compactness” and “meaning,” by attempting to include as much unrelated crap as possible, are actually the exact opposite. This is because, in such grand ambition to do everything, they really do nothing. No real space is given to develop great ideas, much less complex characters. Harlan is so bogged down by detail, by wanting to say as much as possible, that I can’t even point to any essential characteristics she has, except, perhaps, “calm,” “inquisitive” and a few other traits forced (not developed) out of her by Jones. Harlan, maybe, is loud, and somewhat philosophical, but painfully so, as she never says anything of depth, but bloats her speech with the same fluff Harlan is guilty of. All other characters are minor, but it’s interesting to note how, for the most part, the dialogue swims into itself. Subtract the superficial differences – Harlan’s vernacular, Joan’s cursing, or Josef’s propriety – and you have, at bottom, the same intellectual dearth in every character, except now uncolored by the very things that make it possible to follow dialogue. And, since Jones is of the annoying habit of foregoing quotation marks, these superficial markers are really the only thing you have to go by when you’re trying to figure out who the speaker is.

Finally, whatever ideas Gayl Jones had either disappeared by publication or are poorly executed. Harlan’s Southern vernacular, for example, is mixed with comments on intellectual topics in a way that disrupts the credibility of such a voice. Sure, this kind of inconsistency can be pulled off well enough, especially if other novel details and/or merits necessitate or even excuse it, but when Harlan clearly does not know that Alexandria is in Egypt, and not Morocco, while, in the same book, offering exegesis on post-industrialism and music theory, it’s all a bit much. The intent, obviously, is to champion folk traditions as represented by Harlan, but instead, there’s just mass aesthetic confusion with lots of loose ends and contradictions. As discussions become a bit deeper, whether on racism or relationships, Jones, for the most part, sticks to surface observations evident to any intelligent person. The primary motif, healing, is, despite its importance, barely touched as a motif, although it always comes up, especially on the last page: “And when you discover that you can heal yourself, that you simply put your hand to a wound and it heals, you soon discover you can heal others. First a horse suffering from a fractured phalange, and then a Turtle Woman.” It’s Jones’s way of establishing a continuity of theme and idea, but like in other respects, she fails. It is a forced closure, since there are no real evocative scenes of “healing” in the entire book, no deep psychological changes, no emotional crisis and resolutions, merely statements of what occurs via subdued and ill-wrought poeticisms. And, in an important way, if there is no art, the ideas simply don’t matter, forever static in irrelevance. Art, if not very deep, should at least be technically sound. The Healing is neither.