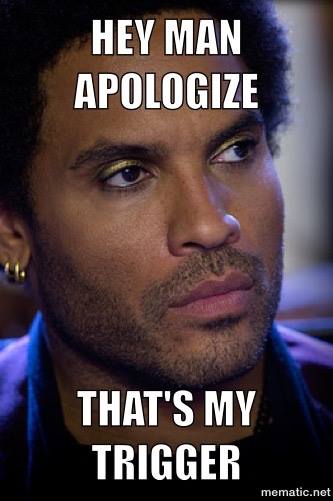 It seems that while human violence is on the ebb, the world’s arsenal is maturing for a very different kind of war:

In a way, this is to be expected. Material concerns have no future. Poverty, in time, shall no longer be in business. And if ideology is less and less in vogue, there must be other things — other means of self-expression — to club each other over the head with. But while the weapons have always been around, their location tends to shift according to the needs of civilization. Today one prods the world for signs of power yet comes up short. One looks for strength and is turned away. Such values are no longer a point of negotiation, for strength is undemocratic- is deemed tyrannical– and has, therefore, been replaced with victimhood and frailty as a new ideal.

Yet the club is no less heavy; is not, to be sure, to be put away merely on account of personal weakness. After all, the drive is still to hurt, to outdo- to overpower. To this end, there’s been a long list of hurts written somewhere in the ether: a catalogue of ills, attachments, and offenses — called “triggers” — that people can freely choose from and indulge as part of their natural identity. Their numbers are numberless, and by extension can pretty much be anything. There’s racism, rape, homophobia, there’s sexist thoughts, ‘fatphobia’, the wrong feelings, or the right ones expressed at the wrong time. In fact, the more of life is seen, the longer this list becomes, for any desire to take offense — and it IS a desire — will forever search for new stimuli, new ways to engage a rapidly narrowing world. Of course, none of it is new at all: it merely comes in greater quanta to satisfy this ever-growing threshold for pain. The lust, here, is to take on as many hurts as possible, to really FEEL them until the world is little more than the sum total of one’s own eye.

Indeed, you could even argue that this is all a hermit kingdom with its own rules, its own army, and its own peculiar sense of decorum. The rule is simple, really: do not offend. Or rather, learn to read the cues to KNOW what offense entails. As for enforcement- there is anger, of course. There are guilt-trips and mobs to help turn others in acolytes. There are emotional fits meant to keep the ‘debate’ (whatever it may be) from crossing the parapet. At times, these kingdoms are too distal, too fucked up, emotionally or otherwise, to truly let others in. At other times, however, a confederation of the offended will come together to- essentially- find ways of never moving past the safety of these walls. Sure, a few might turn into genuine relationships- I do not doubt this. But they will be friendships that, instead of building upon one another’s best, tend to wallow in the worst, until- much to everyone’s surprise- the mirror fogs up, a half-open door goes shut, and they can see NOTHING of the world- no art, no love, no depth, no good, no complexity- but their own emaciated selves in each other.

So how does all this look in practical terms, exactly? Let’s take Rebecca H, for instance. Rebecca’s fat. Rebecca is a woman’s name, but she is not so sure that she’s woman. This might change, of course, but for now, she just fiddles with her name and thinks up special pronouns to accommodate these hypothetical changes. Sadly, Rebecca’s lost some friends recently, for while she was wont to make fun of grammar nazis and the like, she has now taken to correcting her friends for ostensibly ‘deeper’ reasons: their use of “man” for “humankind,” for one, or the way they’d trip up and pause before they’d subcutaneously call ‘him’ a “her.” No matter, for she has just discovered social media and has made new friends, tolerant friends, when others were just a touch myopic. This means that, for all the struggle, all the bullshit, the crass stupidity, there is- finally!- a workaround, if not of reality, then of the way people are free to misinterpret it without reprisals.

Yet something odd has happened in the past week. It is 3:41 AM– again!- and Rebecca has work in a few hours. Yet Rebecca’s still up because one of her new friends said something she couldn’t much appreciate. Fuck knows what it was (she’s long deleted the message) but it reminded her, ever so subtly, of the disrespect she’s always felt. And so, she decides to propel the hurt-to take offense. This means anger, at first, but not for long. The emotion climbs- if that’s the word- up from the stomach, past the many peaks and troughs of a neglected body, idles in the heart, then syrups up the throat until something’s ready to eject. She imagines and re-imagines the original message, adding a word here or there, coloring a meaning, splitting some paragraphs, and combining others until she’s built a catacomb for what was there. It’s 3:41 AM but she still nurtures it, and the bigger it gets, the closer she is to whatever identity that she’s now inadvertently forged. She finally falls asleep but wakes up dizzy. She is not hungry. She need not bathe. She thinks of the message one last time and feels a tingle, a little buzz that shocks her into her clothes, and she’s now ready for work, renewed in some purpose that- she’ll go on to claim- runs well beyond her.

Rebecca has gone through a watershed moment- down to the rocks, turbidity, and all. She has discovered her trigger. In time, it will no longer be something she avoids, but something she indulges. Oh, sure, there will be the inevitable “warnings,” but after a while, they will be explicitly sought until every part of the adult world is apportioned into territories. They will be her mark- her dominion. And while it is not exactly the sort of kingdom Jamukha might be proud of, it is still HER arsenal. It might not be ‘war,’ but given the claims of PTSD from Twitter addicts over bullying, triggers might in fact be MORE than war. They are an aggrandizement. Remember that the ‘idea’ of a thing is often greater than the thing itself, a concept that is still misunderstood by both the Tumblr crowd (who don’t know how to utilize it) as well as their enemies (who take it too literally). Rebecca is essentially in a Platonic world, a world of inversions and reductions and hyper-reductions that will both cushion and define her. But it’ll do something else, too. It will champion her weakness and denigrate her strength. And it will do this by turning her into a bully, for while her trigger hates her, she- quite paradoxically- loves her trigger, and the comfort she must take in comfort.

So what is YOUR favorite trigger? Does it really all somehow imply borders? Insulation? Walls? Something to keep the “thing” out? I’d argue that is one and all for it is all in one. As unique as each person’s narrative is said to be, this narrative is still given to the same meta-patterns everywhere: the tall tales of primitives, the primitiveness of tall tales, and a void that all wish to void but don’t quite know how. Yes, triggers want to be an identity, but must rob identity first. And who can see horizons from such a parapet?

[A version of this article originally appeared on Cosmoetica on 8/12/2015.]