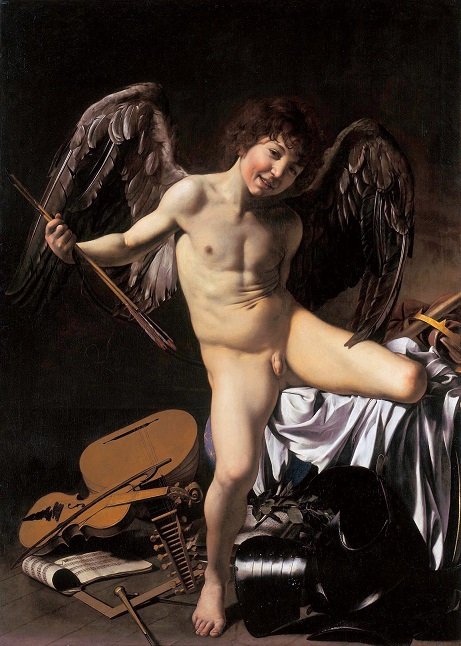 In my article on Hieronymus Bosch, I posit Bosch as a proto-Modern, or even a pure Modern if one considers his work from a purely conceptual standpoint. This is because despite some of his technical lacks (he pretty much worked as a ‘flat’ medieval painter), he was the first to turn these shortcomings into a strength. Bosch took the expected allegories, the almost child-like didacticism of earlier religious painters and deepened them, made these stories richer and fresh. In short, he ripped medieval art outside of its own context, thus sidestepping its worst qualities by focusing on new ones, revealing how even seemingly primitive techniques can be rehabilitated into something worthwhile, a fact that no amount of Renaissance-level realism could have equaled. This was an important move, historically, since it showed that technical ability at the exclusion of all else is NOT the end-all of art — an idea that has still be argued, most notably by Nabokov — but that novel combinations of techniques and ideas can lead to something greater than these individual parts.

Thus, modern painting does not really stem from the innovations of the Renaissance (which were more or less predictable — scientific, even) but the decision to use these innovations for a higher purpose. Sure, Bosch seemed to ignore these innovations altogether, taking a short-cut to this higher purpose while obviating what was superficially new, but it’s the conceptions, the far deeper story-telling that mattered in a way that mere, dull realism could not. Yet just as Bosch eclipsed the Renaissance painters, he, too, would eventually be surpassed when these technical innovations could be married to genuine depth. And this confluence of things would first enter Michelangelo Merisi da Caravaggio (1572-1610), quite possibly the first true Modern, and the greatest artist of any form, medium, or genre, in the West, up until that time. Interestingly, his date of birth coincides with the birth of John Donne, who (excepting the Chinese writers) was probably the greatest writer until that point, while his death parallels the publication of Cervantes’s Don Quixote, which — even more than Shakespeare’s plays — helped usher in artistic modernism.

To see how Caravaggio accomplished all this, I’m going to use just one painting: Amor Vincit Omnia (“Love Conquers All,” or a number of other titles), not because it’s the best or most representative of the above points, but because it is my own personal favorite, and the first painting that really taught me about visual art.Cupid is put into a physical position — almost a contortion, really — that painters before and after Caravaggio have used. Indeed, lots of painters, such as Delacroix and some of the pre-Raphaelites, have erred in thinking that ‘action’ in a painting is best, and that novelty for novelty’s sake (especially in terms of human positioning) might get you somewhere artistically. Yet Caravaggio’s Cupid is anything but novelty, for he’s just crashed through a window, door, or some other opening, landed on some platform, dragged its contents off with his own movement, and still seems to be in mid-flight by the elevation of his right foot. So, while Cupid’s position is a means to show off Caravaggio’s technical skills, it’s also perfectly logical and justifiable vis-a-vis the painting’s own narrative — a distinction that’s lost on the mediocrities who’d rip off Caravaggio, yet without any idea of what really underpinned his art-work in the deeper sense. In short, a painting is (in most cases) a none-too-large item that captures a singular thing. It is immediately within one’s ken, and so it is not like engaging with text. Thus, to force the viewer to jump through hoop after hoop in order to even see its basic purpose is not really art, but occlusion, the sort of occlusion that runs counter to the way that human beings are wired for visual representation, anyway. Caravaggio knew this, implicitly, and therefore made his choices.

Cupid, too, is not exactly the Cupid of Raphael and earlier painters, who were content to simply do and re-do Classical interpretations of stuff that, after 2,000+ years, had gone a little stale. The musculature, here, is occluded by fat, and not an infant’s fat, but an older boy’s; the teeth are ‘off,’ the hair disheveled, and the look (down to the way in which he’s holding his arrows) is that of adolescent mischief — no more, no less. This is at odds with pretty much every other model of Cupid up until this point, and although Carvaggio’s interpretation of love is not 100% new, it is one that takes a typically Greek idea (that of love as a disease to be overcome), corrects its more banal and over-used manifestations, and really puts the classical notion right. If anyone doesn’t quite get why love is so bad, there is your answer in the painting: broken instruments, sheet music that is left on the floor, and that large white sheet — perhaps a symbol of the very things it has once hidden — now fully undone. These are the effects of love, of procrastination vis-a-vis love, of ‘the face that launched 1,000 ships,’ yet represented in a way that’s FAR more clarion than Homer ever did. And this is ‘true’ Classicisim, folks, not the wan patina of such that the Renaissance painters would over-apply until it was all that the viewer could assume, but a darker thing, from a darker time that Christians could not afford to forget, so chose to bowdlerize and draw on in the most superficial way, instead.

Today, the notion of love is completely opposed to Caravaggio’s vision here because, of course, he was quite wrong. But since when is art agreement, disagreement? It is so only to a child: for all that matters, here, is that there’s a vision, and that it’s well-executed. To seek one’s own self in Caravaggio, or to expect that Caravaggio means to recapitulate you, is worse than wrong. It is but diversion.