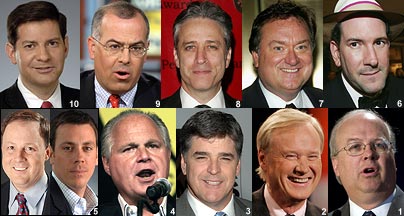 Pundits on drugs. Image via The Telegraph.

Politics is an idiot’s game. In fact, it’s been an idiot’s game ever since the first 2 ‘geniuses’ got together in an attempt to solve a very simple issue: how, at a time when things were a bit more, well, visceral, a couple of poltroons might scheme to overthrow their supposed betters. This is, of course, a good thing, for when aristocrats conk, people will be forced to cooperate. They’ll get smarter and better organized, until a new dilemma emerges. People, after all, still need to be led. People, who’ve improved, as a whole, are still and always will be a mob, ruled by intangibles few can ever hope to master. And people, whether they’ve got their heads in the clouds or their asses in the mud, are still aristocrats at heart, and forever part of this transaction.

So what now? Enter theatrics. Sure, ‘force’ may now be out of the question, but one of the reasons why force has worked so well is that it’s just so dazzling, and not entirely predictable. There’s a mystery both to retaliation as well as its aftermath that grips society and keeps it in check. In a way, then, force is also the politics of the amphitheater, and few things are as theatrical as moral indignation, whether it’s directed at music, unpopular opinions, or the final bogeyman: drugs. The last one is especially touchy, since control (of oneself, of others) is such a deep part of the human condition, to our survival instinct, and, in people’s seemingly never-ending well of insecurity, it is never quite enough to disapprove of something. This disapproval must be elevated to policy, and the policy, in turn, must transform back into a well-cherished value, as to not ‘merely’ be law. This is why drug policy is so backwards the world over, and why, when the police is under attack, drug regulation crumbling, and the old, misplaced, child-like, rococo ‘need’ to keep everything — including people’s bodies  — under one’s own thumb is no longer so obvious, the pundits try to dazzle us, instead.

Drugs, to me, are a very clear-cut thing. And, more than a thing, they are a decision — a mode of being, really — for the thinking behind an indulgence is far more important than the decision itself. Drug addicts are sick, and I don’t mean this in the silly, PC sense of ‘diseased,’ but that they have an existential crisis that’s overtaken them, and an immaturity that feeds upon every other aspect of their lives. For every drug addict, however, there’s a dozen (if not more) drug users, because, well, people want to feel nice, and a few bucks is easier to come by, now, than in any other point in human history. Yes, the consequences of such can be destructive, but 1) the same can be said of a million other things that good sense tells us not to regulate, many of them far worse than America’s comparatively non-existent drug problem; 2) the cost of regulation cuts much deeper ethically, socially, and economically than drug use ever will, for while the proportion of drug addicts will always stay quite low, given what is known of human norms and bell curves and the like, the desire to stamp out desire is an uphill battle with dubious rewards and far too many unintended consequences.

To others, however, the obvious is not so obvious, and of all the razzle-dazzle pundits of the past decade or so, legal commentator and professional moron Nancy Grace might very well be the best of them. In a way, she is perfect for the role of ‘enforcer,’ because while she’s forever barred from the use of force, she still knows how to approximate it; knows what to say and, more importantly, how to say it, so that the thing still looks like the power-struggle of yore, all the while taking pretend-positions that dupe her loyal following into praising not her theatrics, but her dignified moral sense. Sure, some may be bigger, and some may be louder, but she has two suicides under her belt and a much-criticized sob story — advantages, of course, that few pundits can claim. Most recently, she was involved in a spat with rapper 2 Chainz, who came on her show to discuss the legalization of marijuana, but was treated, instead, with the sort of condescension one only sees towards children.

Grace begins with the most transparent of these tools: the guilt-trip. This is when the child knows, or ought to know, that he’s done wrong, and the adult’s voice slows down, becomes measured, articulate, so that each word can be fully heard. She informs him that he’s a “star,” and that so many “look up to him” — a lie I’ve often repeated to children, myself, especially to the wannabe leaders among them. She asks why, despite his 4.0 at college, he’s for the legalization of marijuana, all the while some ‘naughty’ clips from his music videos play, thus casting doubt on both his character and intellect and obviating her own praise. He giggles (he’s on to her!) as she gently chides him for his lyrics, rolling her eyes. The images, at this point, come fast, as if to slip by you, as 2 Chainz calmly rejects her stupidity: a stupidity that, as per Grace’s style, reaches its Maury Povich-level heights when she plays a video of a mentally ill woman giving drugs to her toddler, and extrapolates some kind of epidemic from all this. 2 Chainz stays calm, for he is NOT a child, sees through the bullshit, and even says so on multiple occasions, delivering a story of enforcement-related waste that shuts Nancy up for a few seconds before she begins the same hysterical cycle anew.

It is silly, of course, to have to sit through this, and to think that there are people out there who’d sit through it, too, and take it seriously. I mean, forget, for a second, all the good, perfectly selfless arguments for drug legalization, here, on the one hand, and Nancy Grace’s high dudgeon on the other. Look down, for a moment, towards Mexico, and towards South America, and reflect on the fact — listen carefully, now, for we are no longer in the realm of hypotheticals — the fact that the region is a sewer; that after decades of trying to control the drug cartels, millions of people are forced to live in de facto war zones amidst pure economic anarchy; that entire towns are uninhabitable and that no one plans to do a damn thing about it, for the most obvious solution is so egregious, so heretical, that terror, we are told, is preferable to living. All this, it should be noted, so that Nancy Grace and others of that kidney could sit safe — morally superior, really — with the knowledge that no child in America can be bullied into a bong-hit by some psychotic.

Although the crux of my argument is liberty, I will not end with that horrible platitude: ‘Give me liberty, or give me death!’ The purpose of the law, as I see it, is to preserve life, first, and wisdom second, and the best one could say for liberty is that it allows the other 2 to reach their meridian. Yet freedom, for some reason, is what’s feared most deeply, no matter how irrational this is. Had Nancy Grace been born in 2050, best believe she’d find something else to be outraged over: many (if not all) drugs will be legal by then, but what of sex chambers (a la Woody Allen’s Sleeper), or marriage between man and terrier, the right to bear ass with neither shame nor trepidation, and other seemingly endless ‘attacks’ upon the fabric of our planet? This, I’m afraid, is too much to think about right now, for it is too distal, and too forward. Now, if you want my advice… ah, fuck it, Nancy! Go grab some blunt-wrap and a lighter, and let 2 Chainz show you how to roll it!

[This article first appeared on the Cosmoetica website on 1/20/15.]